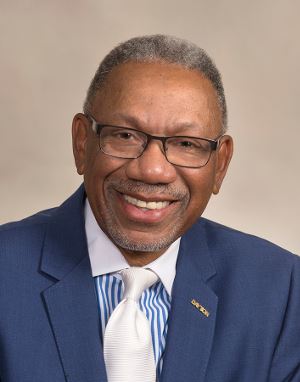 Jeff Mims was the Third District Representative for the Ohio School Board and is past president of the Dayton Board of Education, after retiring from Dayton Public Schools with more than 35 years of service, serving recently served as Director of Government and Community Relations and Compliance. His diverse work within the district included garnering support for equitable funding of Ohio’s public schools, and his efforts helped pave the way for Ohio’s New School Facilities Program. He was elected President of the Dayton Education Association (DEA) for six consecutive terms. As President of the DEA, Mr. Mims negotiated the district’s first multi-year contract between the DEA and the Dayton Board of Education.

For the past 40 years, whether as a teacher, a coach, a community volunteer, or president of the Dayton Education Association, Jeffrey Mims has committed to making the city of Dayton and the Dayton Public Schools strong partners in developing a “Champion City and School District” and improving the quality of life for Dayton citizens through education.

Additionally, Jeff Mims is a Vietnam veteran, a member of the Kappa Alpha Psi Fraternity, Inc., and a volunteer with the Dayton Youth Golf Academy and the YMCA Mentors Matter program.