Voting rights are of paramount importance in historically swing states like Ohio. With recent elections being settled by small margins, there’s even more truth in the common saying – “every vote counts.” The removal of thousands of Ohio voters has the potential to be highly influential in the outcome of future elections.

In late June, voting-rights groups brought a case to the U.S. Supreme Court claiming voters were being illegally purged from Ohio’s voting rolls. The Court ruled 5-4 in favor of Ohio’s voter administration process, allowing current voter maintenance practices to be upheld. Voting-rights groups were determined to have their case heard and continued to contest the legality of notices sent to ineligible voters. The state sends a confirmation notice to voters who have not participated in three consecutive federal elections. Voting-rights advocates claim these letters are vague in outlining the consequences of not responding, leaving many Ohio residents unlikely to request their registration remain intact.

In late October, federal judges granted an emergency motion filed by voting-rights groups contesting the legality of confirmation notices. They ruled that Ohio voters who had not participated in the system over the past 6-year period were still eligible to participate in the 2018 midterm elections. This was a major win for voting rights groups. However, this victory was short lived, and Secretary of State Jon Husted gave a directive to resume the controversial updating of Ohio voter rolls in late November following the election. This action will likely lead to the removal of thousands of inactive voters from the voter rolls. Husted explains that this action is necessary to “preserve the integrity of our elections.” Husted and fellow republicans argue that over time voter rolls become bloated with the names of ineligible voters and removing them from the system ensures the voting process runs smoothly. At this time, all those who fail to respond to notices by December 12th will be removed from the voter rolls come January 11th.

David Pepper, Chairman of the Ohio Democratic Party, voices his opposition to the voter removal policies in Ohio. Pepper and his fellow democrats claim every vote counts, even if someone has not engaged in the political process in recent years. Opponents of the voter removal policy also point out that these practices have a history of disproportionately impacting minorities and low-income voters. Pepper and the rest of the Democratic party are urging Secretary of State-Elect Frank LaRose to put an end to the current voter removal process.

LaRose has come forward to state that he hopes to make such extensive voter maintenance unnecessary by replacing the old system with one that makes it easier for people to register and stay registered. His plan involves changing Ohio law so whenever residents perform official government duties such as renewing a license or paying taxes, they are prompted to make sure their voter registration is up to date. Once LaRose takes office in January, we will likely get a better idea of the future of Ohio’s voting administration process and policy. 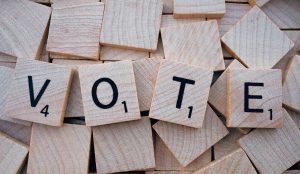