The Educational Choice Scholarship Program, or EdChoice, provides a maximum of 60,000 scholarships, also known as vouchers, for students to attend participating private schools.  Students must meet eligibility requirements in order to receive a voucher. There are two ways in which a student can qualify for a voucher.  The program began in 2005, and eligibility was solely based on the performance of the schools in the student’s district of residence.  The program was later expanded to give vouchers to students who meet income requirements.

Students who wish to participate in the traditional EdChoice program must meet certain conditions.  The student must first apply and be accepted to a participating private school.  Next, students must be enrolled in, attending, or would be assigned to an EdChoice public school in their district of residence. A school becomes designated for the program based on three years of school report card data. Students enrolled in and attending community schools who would otherwise be assigned to EdChoice public school are also eligible to apply for the program.  Homeschooled children are eligible if they reside in an EdChoice designated district.  Students who do not meet these requirements may still qualify for a voucher under the expansion if their family household income is at or below 200% of the Federal Poverty Guidelines.

Students who have been accepted into a participating private school and have been awarded a voucher can receive up to $4,650 for grades K-8 and $6,000 for grades 9-12.  The voucher only covers tuition to the school, not any other fees. If a student qualified for the scholarship under the expansion, the family does not pay the difference between the scholarship and tuition.  However, if the student is not low-income, the family likely must pay the difference.  Vouchers that are awarded under the traditional EdChoice program are funded by deductions in payments to the student’s residing school district.  Income-based vouchers are funded though the state General Revenue Fund.

In late January 2020, the Senate passed a bill which limited the number of EdChoice designated schools  and raised the income-based voucher eligibility to 300% of the Federal Poverty Guidelines.  The bill also allocated $30 million to districts that were highly affected by the 2019-2020 voucher expansion.  The House did not pass this bill and instead agreed to delay EdChoice applications by two months.

On February 5, 2020, the Ohio House approved a bill which overhauled the state’s voucher program.  Under the House plan, the changes would take effect in fall 2020 and the program would be renamed the Buckeye Opportunity Scholarship Program (BOSP).  The House plan would phase out the performance-based vouchers and increases income eligibility to 250% or below the Federal Poverty Guidelines. The BOSP would be funded by the state rather than from deductions from payments to public schools.  Students who are already receiving performance-based vouchers would be able to continue receiving them as long as they meet the original eligibility requirements.  Currently, the measure has not been voted on by the Senate. 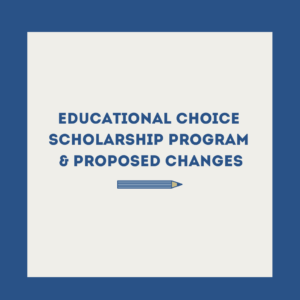