On Thursday, July 30 the Ohio House of Representatives held a vote to elect Representative Robert Cupp as Speaker of the House. The vote was 55-38 with all Democrats and two Republicans voting no. Following the vote, Representative Cupp was sworn into office by state Supreme Court Justice Judith French. Cupp replaced Representative Householder who was unanimously removed from the speakership earlier in the day.

Ohio representatives are free to choose a new Speaker at any time with a simple majority vote, which effectively unselects the previous speaker. If no member receives a majority, lawmakers continue voting until a majority is reached. If no member gets a majority after the tenth vote, then the candidate on the eleventh ballot who receives the most votes becomes speaker. Article II, section 6 of the Ohio Constitution requires a two-thirds vote to expel a representative from the House entirely for “disorderly conduct”. Ohio law also forbids lawmakers from serving if they are convicted of a felony, and they are removed once convicted.

Cupp emerged early on as a contender for Speaker after being drafted for the position by Representatives Scherer and Plummer. Scherer told The Columbus Dispatch that, “Bob Cupp came top of mind for being the most highly ethical and team-building kind of guy”. Scherer and Plummer distributed a letter to the Republican Caucus a week before the vote urging their colleagues to support Cupp as Speaker. The two representatives called for building and restoring unity in the caucus and described Cupp as a respectful and fair leader, honest, trustworthy, and above reproach. Cupp accepted the candidacy the next day saying, “It’s always been my position that if there’s something I can do to help make things better, it’s my duty to do that.”. Other House Republicans who put their names forward were Representatives Butler, Ginter, Carfagna, and Riedel.

As Speaker, Cupp will have one of the most powerful jobs in state government. As the head of the Ohio House, the Speaker guides the agenda of the chamber, presides over session and provides direction to fellow members and staff. Along with the House Leadership team, the Speaker decides when bills sponsored by individual members reach the House floor for a vote and determines committee chairmanships and leadership positions in their respective caucus.

Representative Cupp has a long history of public service. He is currently in his third term, representing Ohio’s fourth district. Due to term limits, if elected in November, it will be his final term. Prior to serving in the House, Cupp served as a state Supreme Court Justice from 2007 through 2013 and served four terms in the Ohio Senate from 1985 until 2000. While in the senate, he served two terms as the President Pro Tempore, the Senate’s second highest leadership position. Cupp has also served as Lima’s city prosecutor, two terms as an Allen County Commissioner, a court-of-appeals judge, and as Chief Legal Counsel to former Ohio Auditor of State Dave Yost. He has won numerous “Legislator of the Year” awards and received the “Watchdog of the Treasury Award” five times. He also raises and rescues llamas with his wife, and they have had up to a dozen of the animals. 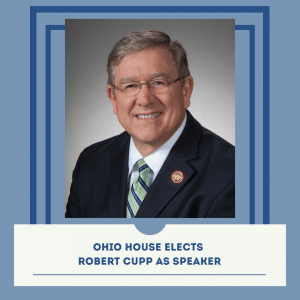