The MHSF was created by Governor DeWine on April 20, and was formed to examine the disproportionate impact of the COVID-19 pandemic on minority communities. At the time of its creation, twenty-one percent of individuals who tested positive for the virus were African American while they only make up about fourteen percent of Ohio’s population. The force was also charged with examining broader health disparities and racial injustices. The MHSF is co-chaired by Director Alisha Nelson of RecoveryOhio and Director Ursel McElroy of the Ohio Department of Aging.

On May 21, the MHSF released their initial findings in an interim report at a time when African Americans represented twenty-six percent of positive COVID-19 cases, thirty-one percent of hospitalizations due to the virus, and seventeen percent of virus deaths in the state. The purpose of the report was to provide feedback on the immediate action necessary to address the pandemic and its disproportionate effect on people of color in Ohio. The MHSF’s goals in developing the report were to stop the progression of the virus, evaluate and document its impact, remedy factors that contribute to virus spread, and procure resources to prevent a resurgence of the virus. To tackle the wide range of factors that influence health outcomes, the MHSF divided into four subcommittees: health care, education and outreach, data and research, and resources. The findings in the interim report include recommendations to address disparities in testing, contact tracing, and treatment; campaign messaging that informs, involves and inspires audiences; gaps in data and the development of data-driven policies to support response and recovery efforts; and access to necessary supports such as business assistance, employment, food, transportation, and housing.

In response to the interim report, Governor DeWine announced a new position in the Ohio Department of Health dedicated to addressing social determinants of health and opportunity. The person in this position will expand efforts to respond to health inequity by working with local communities on their specific health needs, both long-term and in response to the pandemic. Another responsibility of the position is to ensure that the short- and long-term recommendations from the MHSF are implemented. The governor also announced that Ohio partnered with the Ohio Association of Community Health Centers to expand access to testing in rural and urban neighborhoods in Ohio.

The final MHSF report titled, the Minority Health Strike Force Blueprint, not only addresses disparities in the effects of the pandemic on minorities; it also addresses the deep roots of the health disparities of at-risk groups including communities of color, immigrants and refugees, migrant workers, those with disabilities, Ohioans over 60, rural communities, and Ohioans who identify as LGBTQ. The thirty-four recommendations in the report are aimed at laying the groundwork for dismantling racism and advancing equity by addressing social determinants of health like a person’s social, economic, and physical environment, health behaviors, and health or clinical care of Ohio’s most at-risk individuals. The report also states that actions to implement the recommendations should be reviewed annually and published on ODH’s website. The recommendations provide first steps to removing historical and contemporary hurdles that communities of color face in accessing health care and public health services.

The Ohio Executive Response to the MHSF is a document containing commitments that have resulted from state leadership and cabinet director discussions that will guide leaders in a strategic planning process to implement the recommendations. The commitments and strategic planning process are intended to advance equity in Ohio’s systems, promote diversity, equity, and inclusion in state workplaces, ensure equity is embedded in Ohio programs and policies, and provide tools for state partners to advance equity in public service. In accordance with the first commitment in the document, Governor DeWine announced the creation of the Ohio Governor’s Equity Advisory Board. The Board will be comprised of individuals who have served communities of color in health care, education, criminal justice, and other capacities. Both the MHSF recommendations and Governor DeWine’s response move the state towards its vision of establishing Ohio as a model of justice, equity, opportunity, and resilience to withstand future challenges. 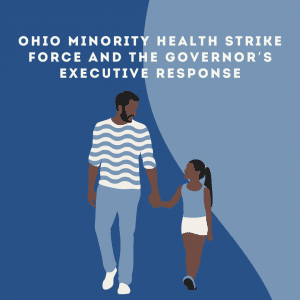