With the primary election behind them, Ohioans begin to look towards the November election. According to a recent poll, President Donald Trump narrowly leads former Vice President Joe Biden in Ohio’s 2020 presidential election. The survey, conducted by Emerson College and Nexstar Media, shows President Trump three percentage points ahead of Biden leading 46% to 43%. President Trump appears to have similar support to what he received in Ohio during the 2016 election where enthusiasm played a major role. The poll reports 36% of President Trump supporters either “extremely or very excited” to vote for the president, with only 20% of Biden supporters reporting the same levels of enthusiasm. For roughly 30% of those polled, the economy is their main voting issue. President Trump has called for the reopening of the economy. However, even with an economy on the mend, the president faces a potential second wave of COVID-19 outbreaks this fall that is likely to play a major role in the both the economy and the November election.

The potential for a close race in Ohio is certain to grab national attention and place added scrutiny on Ohio’s chief elections officer, Secretary of State Frank LaRose. Following a sometimes confusing and contentious absentee-only primary election this spring, Secretary LaRose has announced plans for the November election to include both absentee and in-person voting. He expressed a desire to streamline voting by mail, making it more accessible in the anticipation of a potential COVID-19 surge this fall. This aligns with poll results showing 56% of Ohio voters prefer to vote by mail because of safety concerns surrounding COVID-19. One proposed change includes allowing voters to apply for ballots online rather than requiring them to be printed out. Secretary LaRose is also asking for postage-paid envelopes for ballots, a new deadline for requesting a ballot, and the release of federal funds to bolster the state’s 88 boards of elections tasked with processing large volumes of absentee ballots.

Secretary LaRose has received backing from the Ohio Association of Elections Officials. However, his plan requires support from the Ohio General Assembly if he hopes to see these measures passed before early voting begins on October 6. A group of democratic lawmakers has already called for the changes Secretary LaRose is proposing, indicating support from the minority party. Democrats aren’t stopping there, calling for the approval of third-party groups to collect and deliver completed ballots. The practice, commonly known as “ballot harvesting” is meant to encourage voter participation but has been called under scrutiny for increasing risk of voter fraud. Secretary LaRose has spoken out against ballot harvesting. House Speaker Larry Householder has not gone into specifics on where the majority party stands on this issue but has expressed a general desire to implement an emergency voting plan to avoid the issues faced in Ohio’s primary election. Whatever the changes may be, Ohio voters are sure to see an altered voting landscape come November. 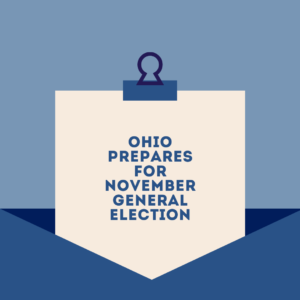