Police reform is gaining sustained, national attention amid continuing protests across the country. In Ohio, a police reform bill, House Bill 703, has been drafted in the House and Ohio House Democrats have put forward a variety of bill ideas to address police and civil justice reform. Governor DeWine and Attorney General Yost unveiled several key reform priorities in a press conference on June 17. On the same day, the Ohio Mayors Alliance announced that they would create a Police Reform Support Network. These police reform initiatives primarily focus on increased transparency, independent oversight, and more training for officers.

On June 9, Ohio House Democrats unveiled nine bill ideas for addressing policing reform and plan to introduce a comprehensive bill package. The minority caucus is considering a bill that would prohibit Ohio police from purchasing or receiving military equipment from the federal government. They are also considering crafting legislation that would prohibit arrest or citation quotas, profiling, and the use of tear gas across the state. Other proposals are to require bias-based police training, expanding de-escalation training, creating a centralized use of force database, and requiring independent investigations of misconduct. The nine proposals have not yet been formally introduced in the House.

Ohio House Republicans on June 11 introduced HB 703, a 15-point piece of legislation that aims to reform policing.  The bill “expresses the intent of the General Assembly to study and implement professional police practices in Ohio”. The bill’s major components include psychological testing and mandatory standards for officers, the creation of a disciplinary database, and more training. Another provision of the bill would require the remaining 35% of Ohio law-enforcement agencies in the state who aren’t currently following the standards set by the Collaborative Community-Police Advisory Board to comply. This includes standards for employee conduct, body cameras, bias-free policing, and community engagement. Additionally, the bill would make the Bureau of Criminal Investigation responsible for investigating all police-involved deaths in the state. The bill is awaiting action in the House.

Governor DeWine and Attorney General Yost expressed support for police reform and announced several proposals at a press conference on June 17. The proposals reflect similar reforms put forth by members of the Ohio House. Major proposals from the press conference include banning chokeholds in all but life or death circumstances, requiring body cameras, and requiring professional licensing for officers. The Governor and Attorney General also proposed requiring independent investigations and prosecutions of officer-involved shootings and deaths in custody. Furthermore, they proposed mandatory reporting of use of force incidents and creating a publicly available database of those incidents. The Governor and Attorney General will need action from the General Assembly to actualize many of these reforms. They are calling on the legislature to create a standard definition for use of force, legislate the ban on chokeholds, identify funding for increased training and body cameras, and to permit an oversight board under law.

While the General Assembly would need to make many of these reforms into law, the Governor and Attorney General announced steps they are currently taking. They will be immediately begin requiring independent investigations of Ohio State Highway Patrol (OSHP) and Bureau of Criminal Investigations misconduct. The Governor announced that the Ohio Department of Public Safety’s Office of Criminal Justice Services (OCJS) will begin developing a public use of force database. He also directed all cabinet-level agencies that utilize law enforcement to examine their use of force policies and address the use of chokeholds. Other actions include outfitting OSHP troopers with body cameras, the creation of the Ohio Office of Law Enforcement Recruitment, and reimbursing local agencies for six hours of training.

On the same day as the Governor and Attorney General’s press conference, the Ohio Mayors Alliance, a bipartisan group of mayors from across the state, announced they would create a Police Reform Support Network. The network would help cities across Ohio assess reform strategies, share best practices and standards, and support efforts to implement best practices to address racial bias and improve community-police relations. The network will work with OCJS to coordinate state and local efforts and to ensure the efforts of local governments are cohesive with the Ohio Collaborative on Community-Police Reforms. In Columbus, the city has started to establish independent civilian review boards and Columbus police will no longer be permitted to use tear gas as a crowd-control measure, and pepper spray will be limited to “clear instances of violence”. In Dayton, Mayor Whaley announced that the city is looking into prohibiting tear gas and rubber bullets from police use.

Calls for police reform are reverberating across the state of Ohio from both citizens and elected officials. At both the state and local levels, officials are committing to reform police practices. While many officials agree on the need for reform and many of the reform proposals, issues such as uniformity across the state and funding for additional training and body cameras still present issues. 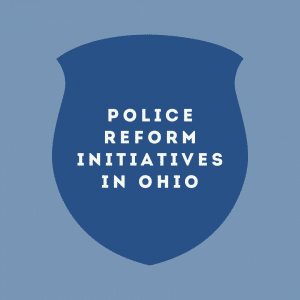