Resolutions in Ohio to Declare Racism a Public Health Crisis

Major health disparities exist between white Americans and black Americans. For example, black women are four times more likely to die of pregnancy complications than white women and the average life expectancy of black Americans is four years lower than the rest of the population. In Ohio, black Ohioans are more likely to die of cancer, diabetes, heart disease, and stroke. Ohio also has one of the highest black infant mortality rates in the country. Multiple public health studies have concluded that institutionalized racism is the cause for these and other health disparities.

Government resolutions that declare racism a public health crisis have passed or are being considered throughout the country and across Ohio. More than 20 cities and counties have considered such resolutions including Indianapolis, Cleveland, Columbus, Pittsburgh, and Milwaukee. The resolutions recognize how imbalances attributed to systemic racism have persisted and call for a formalized approach to address institutional inequities.

On May 12, the Franklin County Public Health department enacted a resolution to declare racism a public health crisis. The Franklin County Board of Commissioners followed suit and passed a similar resolution on May 19. The resolution passed by the commissioners calls the disparate effects of COVID-19 on black Americans a “contemporary example” of poor health outcomes resulting from social inequities.

In recent weeks, other Ohio local governments have passed similar resolutions. On June 1, the Columbus City Council passed resolution 0095x-2020. On June 3, the Cleveland City Council passed a resolution that was originally proposed in March. The City of Akron declared racism a public health crisis on June 8 and will now create a task force to develop a five-year strategic plan. The City of Dayton is considering a similar declaration and conducted a public meeting on June 9 with a group of residents and experts discussing racism’s impact on the community. On June 14, Summit County commissioners declared racism a public health crisis as did Montgomery County on June 15.

On June 2, resolutions at the statewide level were introduced in both the Ohio House of Representatives and Senate to declare racism a public health crisis, and to ask Governor DeWine to establish a working group to promote racial equity in Ohio. If passed, they would be non-binding, but would ask the governor, state agencies, and lawmakers to address 16 points. Some of these points are to support initiatives that advance efforts to dismantle systematic racism, provide training to all state employees on workplace biases, and to incorporate educational efforts to address and dismantle racism.

The Senate Health, Human Services, and Medicaid Committee held a public hearing for the Senate resolution on June 9. Hundreds of people including elected officials, citizens, and medical organization representatives submitted testimony in support of the resolution. As more local governments like Hamilton County are considering passing similar resolutions, Senate leadership announced that there will be a special committee established to go on a listening tour in the coming months. 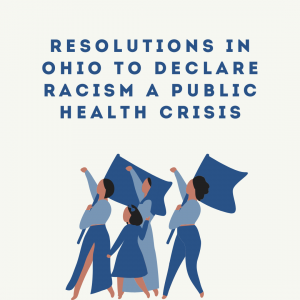