Although the 2020 Post Election Conference looked different this year due to its virtual nature, we were still able to hear from many influential Ohioans.

Election 2020: Observations from the Media, discussed the election from the perspective of Ohio’s media outlets. The opinions were given by Darrel Rowland (The Columbus Dispatch), Karen Kasler (Statehouse News Bureau), and Jackie Borchardt (Cincinnati Enquirer). Jenny Camper (Lesic & Camper Communications) served as the moderator.

The keynote address, given by Dr. Trevor Brown and Governor Mike DeWine, offered a fantastic analysis of Ohio’s election, as well as the effects of the pandemic on the state.

Updates were given by Lt. Governor Jon Husted, Treasurer of State Robert Sprague, and Secretary of State Frank LaRose as well.

A Reflection on Campaign 2020: A Political Analysis, heard dialogues from prominent members of both political parties. The discussion between Toni Webb, Joe Biden’s Ohio Campaign Director, and Jane Timken, the Chair of the Ohio Republican Party, were moderated by Laura Bischoff (Dayton Daily News).

Ohio’s budget and funding for 2021-2022 was discussed by Kimberly Murniek, Director of the Office of Budget Management, Representative Bill Seitz, and Senator Vernon Sykes. McKenzie Davis  of The Success Group moderated this discussion.

We are so thankful that our speakers were willing to join us despite the circumstances. Thank you to our speakers! 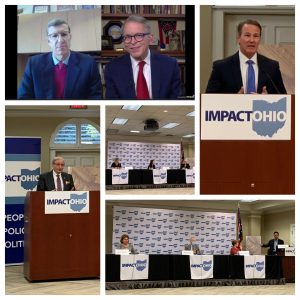