We are pleased to announce that all four legislative leaders of the Ohio General Assembly will speak at the 2020 Impact Ohio Post Primary Election Conference on Monday, March 23 at The Athletic Club of Columbus. Senate President Larry Obhof, Senate Minority Leader Kenny Yuko, Speaker of the Ohio House Larry Householder, and House Minority Leader Emilia Sykes will each discuss their priorities for the remainder of the 133rd General Assembly.

Senate President Larry Obhof has proudly represented the people of the 22nd Senate District since 2011, which includes Medina, Ashland and Richland Counties, and portions of Holmes County. He was unanimously chosen by his colleagues to serve as Senate President in the 132nd General Assembly and has received numerous honors, including several “Legislator of the Year” awards. In addition to his legislative duties, Obhof is an attorney at Squire Patton Boggs LLP. He received his bachelor’s degree from The Ohio State University and his law degree from Yale Law School. Obhof resides in Medina with his wife, Nicole and their three daughters.

Speaker  Householder is in his second consecutive term serving the people of the 72nd House District, which encompasses all of Coshocton and Perry counties, and part of Licking County. On January 7, 2019, the Ohio House of Representatives elected Householder to serve as Speaker of the House for the 133rd General Assembly. Householder previously served in the Ohio House from 1996 to 2004, and was elected by his peers unanimously to serve as Speaker in 2001 and again in 2003. In 2017, he was elected back to the Ohio House of Representatives by the people of Ohio’s 72nd House District. Householder and his wife, Taundra, live in Perry County on their family farm where they raised their five sons.

Senate Minority Leader Kenny Yuko  has represented Ohio’s 25th Senate District since 2015, which includes parts of both Cuyahoga and Lake Counties. He attended both Cuyahoga Community College and Kent State University before entering the workforce. He served with the Laborers’ Local #860 for 30 years, including 25 years as union organizer. With this experience under his belt, Yuko ran for State Representative in 2004. He won convincingly and was subsequently re-elected for three more terms. During his tenure in the House, he served as both Chairman and Ranking Member of the Commerce and Labor Committee, and was also a member on the Committees on Health and Aging and Veterans Affairs. Yuko resides in Richmond Heights with his wife Pam. He has two grown children, Rocky and Angela, and three grandchildren.

House Minority Leader Emilia Strong Sykes was elected to represent Ohio’s 34th House District in November 2014. Sykes serves as Democratic leader of the House minority caucus, a position to which she was elected by her colleagues. Sykes previously worked at the Summit County Fiscal Office and at Community Legal Services in Akron. Sykes also served as Law Clerk to the Chief Judge of U.S. Bankruptcy Court in the Northern District of Georgia. Sykes attended Kent State University, graduating magna cum laude with a B.A. in Psychology. She later attended the University of Florida, where she earned a Juris Doctorate with a Certificate in Family Law from the Levin College of Law and a Masters of Public Health from the College of Public Health and Health Professions.

We look forward to hearing from Ohio’s legislative leaders on March 23. 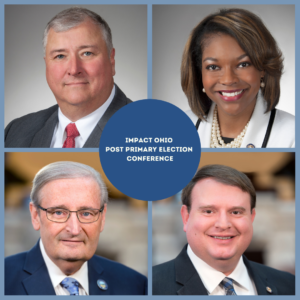