We are excited to announce the first panel of the day at the 2020 Impact Ohio Post Primary Election Conference. The conference will take place on Monday, March 23 from 11:30 a.m.-3:00 p.m. at The Athletic Club of Columbus.

“Election 2020: A Look at National Politics” will take place from 12:10 p.m.-1:10 p.m. During this session, panelists will discuss the Primary Election and its effect on national politics. Panelists include Dayton Mayor Nan Whaley and Bob Paduchik, Senior Advisor to President Trump’s 2020 Re-Election Campaign and President of Agincourt Consultants. The panel will be moderated by Dr. John Green, Director Emeritus at the Ray C. Bliss Institute of Applied Politics at the University of Akron.

Mayor Whaley is proud to choose Dayton as her home. Originally from Indiana, Whaley attended the University of Dayton where she graduated in 1998 and soon settled in the Five Oaks neighborhood, where she and her husband Sam reside today. Her career is distinguished by her commitment to public service, civic involvement and interest in local government. First elected to the Dayton City Commission in 2005, she was the youngest woman ever chosen for a Commission seat. She was proud to be elected as Dayton’s mayor in 2013 by a double-digit majority. In 2017 she was re-elected mayor without opposition, a first in Dayton’s history. Whaley is a founding board member for the Ohio’s Mayor Alliance, a bipartisan coalition of Ohio’s 30 largest cities. She has been committed to the political process in local, state and national elections. While in college, she served as Ohio Chair of the College Democrats. She currently serves as the Vice Chair of the National Conference of Democratic Mayors. Additionally, she is a four-time delegate to the Democratic National Convention.

Robert Paduchik is an accomplished strategist with three decades of experience leading political and public affairs campaigns. He is recognized by many political professionals as one of the “outstanding campaign managers in America” and an expert in Ohio politics. Paduchik has gained extensive experience advising Republican campaigns at the local, state, and federal level. He is a proven leader of multi-million dollar initiatives representing the energy sector and other industries. He currently serves as a Senior Advisor for Donald Trump’s 2020 Presidential Re-Election Campaign. Paduchik was also the campaign’s Ohio state director in 2016, and he was Co-Chairman of the Republican National Committee from 2017-2019.

Dr. John C. Green is the director of the nationally renowned Ray C. Bliss Institute for Applied Politics, a senior research advisor to the Pew Forum on Religion and Public Life, and a political scholar whose insights are frequently reported by local, state and national media.  He also served as interim president at the University of Akron from May 1, 2018 to October 1, 2019, and has more than 30 years of service as a UA administrator and faculty member.  A Distinguished Professor of Political Science, Green was twice selected as Outstanding Faculty Member by the Board of Trustees. His works include 9 books, 32 edited books, 39 refereed journal articles and 120 other scholarly and popular publications.  He earned a Ph.D. from Cornell University and Bachelor of Arts from the University of Colorado.

We look forward to hearing these experts discuss the impact the Primary Election will have on national politics and what we can expect to see in the November election. 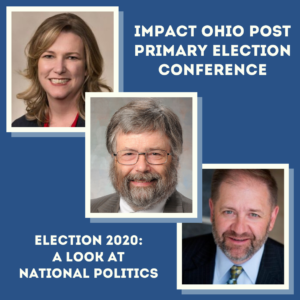