We are excited to announce the second panel of the day at the 2020 Impact Ohio Post Primary Election Conference.  The conference will take place on Monday, March 23 from 11:30 a.m.-3:00 p.m. at The Athletic Club of Columbus.

“Election 2020: A Look at Ohio Politics” will take place from 2:00 p.m.-3:00 p.m. During this session, panelists will discuss the Primary Election and its effect on Ohio politics. Panelists include Janetta King, President and CEO of Innovation Ohio, and Bryan Williams, Vice Chairman of the Ohio Republican Party. The conversation will be moderated by Statehouse News Bureau Chief Karen Kasler.

Janetta King is the President and CEO of Innovation Ohio.  She founded Innovation Ohio in 2011, leading the organization until 2014 when she left to serve as the Chief of Staff for the Center for American Progress Action Fund in Washington, D.C. Previously, King served as the Deputy Chief of Staff for Ohio Governor Ted Strickland, was the chief policy advisor on Governor Strickland’s 2006 gubernatorial campaign, and worked in his congressional office in D.C. King is a graduate of Pepperdine University and studied government and politics internationally while living in Heidelberg, Germany, working for the U.S. Department of State in Washington, D.C. and supervising elections in Kosovo and Bosnia. She previously served as the Chair of the Ohio University Board of Trustees. Originally from Waterford, Ohio, King currently lives with her husband and two children in Worthington, Ohio.

Bryan Williams currently serves as Vice Chairman of the Ohio Republican Party. He previously served in various roles, including Chairman of the Summit County Republican Party, Director of the Summit County Board of Elections, and Court Administrator for Summit County Juvenile Court. Williams graduated from Denison University in 1987, where he studied Political Science and History. In addition, he served in the Ohio House of Representatives from 1997-2004, representing Ohio’s 41st house district. Williams was appointed by Governor John Kasich as a board member on the State Board of Education, and was later elected to serve a full term. For the past 10 years, Williams has served as the Director of Government Affairs for the Associated Builders and Contractors of Ohio. He is currently a member of the Ohio School Health Services Association, and a board member on the Summit County Board of Elections.

Karen Kasler is a lifelong Ohioan. She grew up in Lancaster, attended Otterbein College in Westerville, and found her professional break at WCBE-FM, Columbus. Kasler was selected as a Fellow in the Kiplinger Master’s Degree Program for Mid-Career Journalists at Ohio State University in 1994. She worked at WTVN-AM and WBNS-TV, both in Columbus, and spent eight years as afternoon drive anchor/assignment editor for WTAM-AM, Cleveland. Kasler was a moderator for the gubernatorial debate in 2018 and U.S. Senate debates in 2016, 2012, 2010, and 2006. She has also led debates on statewide issues such as drug sentencing, marijuana legalization, redistricting, and the collective bargaining law known as Senate Bill 5. Each year she anchors the Statehouse News Bureau’s live coverage of the Governor’s State of the State, and has led coverage of the inaugurations of the last three governors. She has won several awards for her work, and is a former adjunct professor at Capital University in Columbus. Kasler, her husband, and their son Jack live on Columbus’ northeast side.

We look forward to hearing these experts discuss the impact the Primary Election will have on Ohio politics. 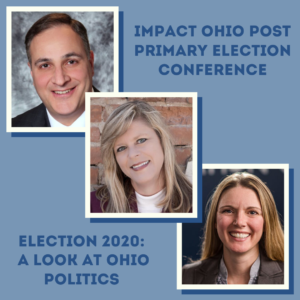