Coronavirus and the 2020 Census

The U.S. Constitution requires a national census be preformed every 10 years. Census results are essential in ensuing accurate political representation and federal funding for various programs like Medicaid, food stamps, and federally subsidized housing. However, due to the global Coronavirus pandemic, many delays and changes have been made to U.S. Census Bureau’s operations.

April 1 is Census Day, which is used to draw attention to the census and its importance. April 1 is also a marker for the Census Bureau to count everyone who is a member of a household. Households that do not complete the census form receive postcard reminders, and if they have not responded by mid-April, they will receive paper forms to complete. Census takers are scheduled to start tracking down those who do not complete the census on May 27. There is a $100 penalty for not filing, which is required by federal law, but no fines have actually been collected since the 1970s.

As of April 1, Ohio has a 45.1% Self-Response Rate, while the National Self-Response Rate is 41.3%. If someone fills out their 2020 Census form after this date, they should respond with where they were living on April 1. This also applies to college students, many of whom have returned home for the semester due to the Coronavirus. The Census Bureau wants as many households as possible to respond early because tracking down non-responders is difficult and expensive.

Census workers traditionally go door-to-door, or to places with large masses of people, such as churches, colleges, and festivals, to collect critical census data. However, due to the stay-at-home orders, these field operations are not currently possible.  As of now, field operations are suspended until April 15. The self-response phase of the census has been extended from July 31 to August 14, which could potentially be extended even further.

The Census Bureau estimates that 46.6% of Columbus’ population lives in hard-to-count tracts. An estimated 12.7% of Ohio’s population lives in hard-to-count tracts. The Census Bureau reports that the 2010 count missed 16 million people across the country, double-counted 8.5 million, and counted another 1.5 million by mistake or in the wrong place. Minorities and young children were undercounted, and non-Hispanic whites were over counted.

An accurate census count is essential in ensuring federal funds are appropriately allocated. In the upcoming months, the Census Bureau will have to continue adapting its strategy to ensure people are counted amidst the Coronavirus pandemic. Federal law requires the bureau to deliver population totals to the president by December 31. 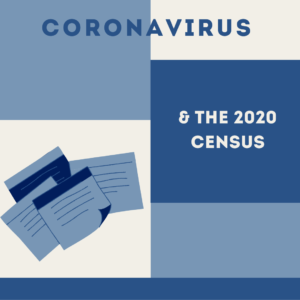