Ohio House Speaker Larry Householder convened a bipartisan task force to lay the foundation for economic recovery from COVID-19 in Ohio. Householder named 24 members to the OHIO 2020 task force on Monday, April 6. The group of legislators is bipartisan with 17 republicans and 7 democrats representing a diverse range of communities throughout Ohio. Rep. Paul Zeltwanger (R-Mason) was named chair of OHIO 2020, while Rep. Terrence Upchurch (D-Cleveland) will serve as vice-chair. House Minority Leader Emilia Sykes has expressed support for the task force and welcomes the dialogue it will bring.

Speaker Householder stated that he is determined to return Ohio to the positive economic state it experienced prior to the COVID-19 pandemic. The economic well-being and future of Ohio’s families and business are of the utmost importance to the task force, who are hoping to identify potential barriers to economic recovery. The task force will hear from those in the business, manufacturing, retail, wholesale, services and recreational sectors during meetings. These guests have been asked to share their experience and concerns in an effort to brainstorm a recovery plan for Ohio’s job market.

The panel met remotely and closed to the public via teleconferencing on Monday, April 6. While this meeting was not subject to open meeting laws, as more details become available the public, the meetings will be available to view online via The Ohio Channel. Speaker Householder hopes to convene the task force multiple times a week considering the urgency of the issue they are tackling. OHIO 2020 is aiming to have a set of recommendations to the governor by late next week. 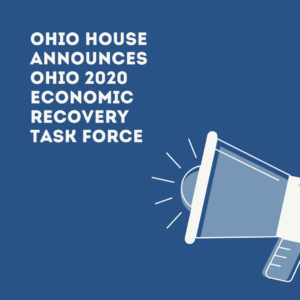