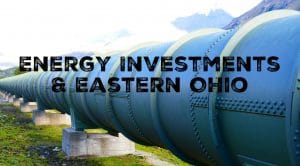 In recent years, Eastern Ohio has often made the news for the wrong reasons: industrial decline, job loss and unemployment, and the ravages of the opioid epidemic.  However, area leaders hope a series of investments by the energy and manufacturing industries will help the region get back on track.

Among the projects that leaders have placed hopes in is a multi-billion-dollar ethane “cracker” plant proposed for Belmont County by PTT Global Chemical, a company based in Thailand. PTT has been studying the potential project site since 2015 when it announced its interest in the area through a news conference with Governor John Kaisch.  Should the project go forward, it would create thousands of construction jobs and hundreds of permanent jobs. Construction of pipelines, natural gas storage facilities, and natural gas processing facilities will all be required to service the proposed “cracker”.

Just two years ago, across the Ohio River in Pennsylvania’s Beaver County, the Royal Dutch Shell company began construction on its own six-billion-dollar “cracker” plant. The Shell plant will create 6,000 construction jobs and 600 permanent jobs.  Industry experts say Shell’s decision to build their own plant is a positive sign that the PTT project will move forward because the baseline infrastructure needed for one plant makes it easier to construct another.

“Cracker” plants convert ethane gas into polyethylene, which is a primary component in plastics and other synthetic materials.  Eastern Ohio and surrounding areas in West Virginia and Pennsylvania are appealing to companies looking to build “cracker” plants because of the abundance of natural gas in the region, which contains the necessary ethane gas for operating the plants. Currently, ethane gas from the natural gas production in the region is shipped via pipeline to refineries along the Gulf coast, or to tanker ships in the East which then take it to Europe.  These shipping and transfer costs can cause production companies to sell the gas at little or no gain.  The “cracker” plants would reduce these costs for gas producers and be the first such plants not along the Gulf.

Since the development of the hydraulic fracturing, “fracking,” process–the process used to extract natural gas from rock formations deep below the surface–Eastern Ohio has seen significant investments from the energy production industry.  The potential of major manufacturing investments by companies that need natural gas products suggests that investors see a strong future for the region’s natural gas industry.

Community leaders hope the chemical plants and natural gas investments offset some of the losses stemming from the decline of the steel and coal industries that once provided thousands of jobs to Eastern Ohio communities.  However, there remains some skepticism among locals about whether the PTT plant will indeed become a reality.  The company missed a self-imposed deadline of the end of last year for announcing its intentions, and now says a decision will be made by the end of this year. Yet, there are strong indications that the region stands to benefit in terms of both job creation and investment dollars from its natural gas resources.  To learn more about the future of the energy industry and regional development in Ohio, check out Impact Ohio’s conferences where these issues and others will be discussed in detail.