As the 2020 Impact Ohio Post Election Conference nears, we are excited to announce the panelists for the “Election 2020: Observations from the Media” session. Impact Ohio has invited experts in journalism and reporting to share their thoughts on Election Day results and what role media has played in the 2020 election season.

The 2020 Post Election Conference will be virtual on Thursday, November 5.  “Election 2020: Observations from the Media” will run from 10:45 a.m.-11:45 a.m. Attendees will be able to ask questions of the panelists and interact with other attendees through the conference’s virtual platform.

The panel will be moderated by Jenny Camper and panelists will include Karen Kasler, Jackie Borchardt, and Darrel Rowland.

Karen Kasler, Bureau Chief of the Statehouse News Bureau found her professional break at WCBE-FM, Columbus. She worked at WTVN-AM and WBNS-TV, both in Columbus, and spent eight years as the afternoon drive anchor/assignment editor for WTAM-AM, Cleveland. She was a moderator for the gubernatorial debate in 2018 and US Senate debates in 2016, 2012, 2010 and 2006. Each year, she anchors the Statehouse News Bureau’s live coverage of the Governor’s State of the State and has led coverage of the inaugurations of the last three governors.

Jackie Borchardt serves as Columbus Bureau Chief at the Cincinnati Enquirer. Borchardt has covered Ohio government and politics since 2012. She joined the Enquirer after nearly five years as the lead Statehouse reporter for cleveland.com and the Plain Dealer. She previously worked for the Dayton Daily News in its Columbus bureau. Borchardt has reported on a variety of topics on the politics beat: presidential elections, ballot issues, public corruption, and important legislation.

Darrel Rowland has worked at the Columbus Dispatch for nearly 30 years and currently serves as Public Affairs Editor. In this role, Rowland supervises coverage of state government and politics through four staffers in Columbus and two in Washington. Rowland directed coverage of the 2018 Ohio mid-term elections, piloted a 2016 campaign team with coverage from 10 states, national conventions, and debates, and conducted the Dispatch Poll, recognized as one of the nation’s most accurate.

We are honored to have these special guests at the conference and look forward to hearing their insights on how the 2020 election will shape Ohio politics and the media’s role in the election season.

A full look at the tentative agenda and registration is available here. 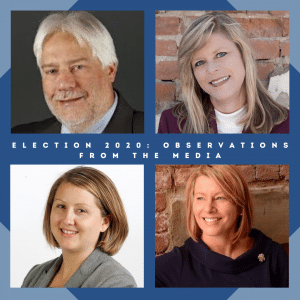