On December 24, 2019, Governor Mike DeWine sent a letter to U.S. Secretary of State Mike Pompeo to authorize the resettlement of refugees in Ohio. This followed President Donald Trump’s executive order mandating state and local governments submit written consent to opt-in to refugee resettlement in their communities.

Roughly 1,400 refugees were relocated to Ohio between September 2018 and September 2019—tied with Kentucky for the fifth-most in the nation. Around 4% of Ohio’s population is foreign born, and Columbus has the second highest concentration of Somali refugees in the country. Refugees considered for admission into the United States undergo a lengthy screening process, generally taking 18 months to two years to complete.

The number of refugees admitted into the United States has generally declined over the past few decades. Following WWII, Congress passed its first refugee legislation to manage the resettlement of roughly 650,000 displaced Europeans. The Refugee Act of 1980, signed into law by President Jimmy Carter, established a standardized system for vetting, admitting, and resettling refugees into the country. Annual ceilings on refugee admissions are proposed by the president and require congressional approval.

Refugees are defined as migrants who are able to demonstrate that they have been persecuted, or have reason to fear persecution, on the basis of one of five protected grounds: race, religion, nationality, political opinion, or membership in a particular social group. In 2018, the majority of refugees admitted to the United States were from the Democratic Republic of Congo, Myanmar, Ukraine, and Bhutan.

Governor Mike DeWine is among more than 30 governors across the country electing to open the state to refugees, writing that, “the State of Ohio has and long a successful history of welcoming and assimilating refugees from all corners of the globe.” Various Ohio Mayors have also written to the U.S. Secretary of State, including Dayton Mayor Nan Whaley and Columbus Mayor Andrew Ginther, to express their willingness to accept refugees into their communities. 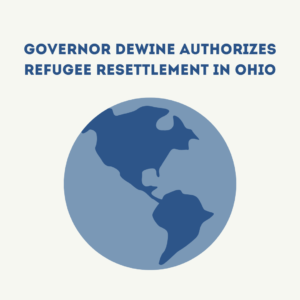