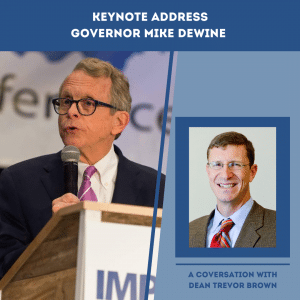 Impact Ohio is excited to announce that Governor Mike DeWine will deliver the keynote address at the 2020 Post Election Conference on Thursday, November 5 at 11:45 a.m. The address will be a guided discussion with The Ohio State University’s John Glenn College of Public Affairs Dean Trevor Brown.

On November 6, 2018, Mike DeWine was elected to serve as the 70th Governor of the State of Ohio. Governor DeWine has had a long and distinguished career in public service, focusing on protecting Ohio’s children and families. He was previously the 50th Attorney General of Ohio and was previously elected to serve as Greene County Prosecutor, Ohio State Senator, U.S. Congressman, Ohio Lt. Governor, and U.S. Senator. Governor DeWine is focused on creating an inviting business environment and bringing and keeping jobs in Ohio. He cares passionately about our state’s future and fights for an Ohio that works for everyone, putting family at the core of everything he does.

Trevor Brown conducts research and teaches on public management and leadership, governance, government contracting, public private partnerships, and democracy and democratic transitions. Professor Brown received his Ph.D. in Public Policy and Political Science from the School of Public and Environmental Affairs and the Department of Political Science at Indiana University and a B.A. in Public Policy from Stanford University. He currently serves as the Dean of the John Glenn College of Public Affairs at The Ohio State University where he has been a faculty member since 2001. He also serves as the Executive Director of the State of Ohio Leadership Institute.

We look forward to having Governor Mike DeWine and Dr. Trevor Brown join us at the conference to discuss issues that are important to both him and Ohioans.