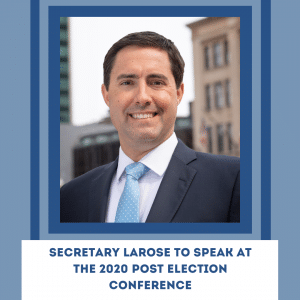 We are pleased to announce that Secretary of State Frank LaRose will speak at the 2020 Impact Ohio Post Election Conference from 3:15-3:30 p.m. The conference will be held virtually on Thursday, November 5.

We are excited to welcome Ohio’s chief elections officer to our event to discuss the importance of the 2020 election and its impact on local and national politics.