How to Vote in Ohio’s General Election

With the general election approaching on November 3, many Ohioans are planning how they will cast their vote. For registered voters, there will be three options for voting in this election: absentee, early in-person, and in-person on Election Day. The deadline to register to vote in Ohio’s general election is October 5 and voter information must be updated no later than 30 days before the election. If registration or an information update is completed after the deadline, it will apply to the next election. Ohioans can register to vote and check their registration status at voteohio.gov. Those who plan to vote can also register by delivering a paper form to their county board of elections (CBOE).

Absentee ballots will be sent to voters with accepted ballot requests when early voting begins on October 6. Early voting lasts for four weeks. Absentee ballots must be received by CBOEs within 10 days after the election and must be post marked on or before November 2. Ballots may also be dropped off in-person to the CBOE or to a ballot drop box by 7:30 p.m. on Election Day. The number of ballot drop boxes is currently limited to one per county; however, the issue is before an Ohio appellate court. Voters who request an absentee ballot who then choose to vote in person will need to submit a provisional ballot at the in-person location. This is to ensure a mail-in ballot was not sent by the voter.

Early in-person voting also begins October 6 and runs until November 2, including the two Saturdays and two Sundays before Election Day. Ohioans can find their polling locations and times by visiting their CBOE website. Ohioans will also be able to cast their ballots in-person on Election Day. Voters must cast their ballot in their precinct at their designated polling place. Polls will be open between 6:30 a.m. and 7:30 p.m, and all voters must have acceptable identification to vote such as a driver’s license or utility bill.

In a recent survey conducted by the Secretary of State, Ohio’s 88 county board of elections reported that they have ample personal protective equipment and sanitary supplies to prevent the spread of COVID-19. Around $11 million of CARES Act funding was directed to county boards of elections to strengthen their election infrastructure, hire employees, and purchase supplies to combat the virus. However, Ohio’s CBOEs are in need of poll workers. While over 44,000 Ohioans have signed up to be poll workers, more are needed to reach the goal of over 55,000.

In an interview with fivethirtyeight, Secretary LaRose implores Ohio voters to make a plan on how they are going to vote. If that plan includes voting absentee, he expresses that it is important to follow all instructions on the request form and ballot. Secretary LaRose also tells voters to consider delays in the mail and asks voters to return their ballot requests and ballots as early as possible. 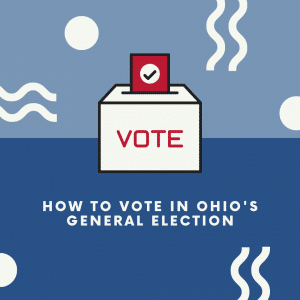