“A Reflection on Campaign 2020: A Political Analysis” Panel Announced

We are excited to announce the panelists for the “A Reflection on Campaign 2020: A Political Analysis” session at the 2020 Impact Ohio Post Election Conference. Impact Ohio has invited political experts to share their thoughts on the presidential election, statewide politics, and the significance of Ohio’s Election Day results.

The 2020 Post Election Conference will be virtual on Thursday, November 5. The “A Reflection on Campaign 2020: A Political Analysis” session will run from 1:00 p.m.-2:00 p.m. Attendees will be able to ask questions of the panelists and interact with other attendees through the conference’s virtual platform.

The panel will be moderated by Laura Bischoff and panelists include Toni Webb, Robert Paduchik, and Dr. John Green.

Laura Bischoff has worked for the Dayton Daily News since 1995 and focuses on state and federal government. She has been assigned to the Statehouse bureau since 2001 and has broken stories on the public pension funds, Ohio State University, Ohio Medicaid and politicians of all stripes. Her work has earned her many state and national reporting honors. Prior to her current assignment, Bischoff worked as a business reporter and covered Dayton city hall. Bischoff was raised in Michigan and is a graduate of the University of Michigan in Ann Arbor.

Toni Webb is the Ohio Director for the Biden for President campaign. She has spent the past decade fighting for working families across the country with the American Federation of State, County, and Municipal Employees. She is a graduate of Millikin University and Saint Louis University School of Law and is a veteran of dozens of political and issue campaigns. In the 2016 and 2018 election cycles, she led For Our Future Ohio, Ohio’s largest permanent progressive field organization that runs issue and independent expenditure programs. Toni is a partner at JM2 a Columbus-based political consulting firm and on the board of LEAD Ohio, Ohio’s progressive leadership recruitment, training, and support organization.

Robert Paduchik is an accomplished strategist with three decades of experience leading political and public affairs campaigns. Recognized by many political professionals as one of the “outstanding campaign managers in America” and an expert in Ohio politics. Paduchik has gained extensive experience advising Republican campaigns at the local, state, and federal level. He is a proven leader of multi-million dollar initiatives representing the energy sector and other industries. He currently serves as a Senior Advisor for Donald Trump’s 2020 Presidential Re-Election Campaign. He was also the campaign’s Ohio state director in 2016 and was Co-Chairman of the Republican National Committee from 2017-2019.

Dr. John C. Green is Director Emeritus of the Ray C. Bliss Institute of Applied Politics. His more than 30 years of service at The University of Akron includes time as interim president of the University, dean and interim dean of Buchtel College of Arts and Sciences, vice dean for liberal arts, chair of the Department of Political Science, and interim chair for five other departments.  He is also a senior research advisor to the Pew Forum on Religion and Public Life and a political scholar whose insights are frequently reported by national newspapers and major broadcasters, as well as state and local news outlets. His published works include 9 books, 32 edited books, 39 refereed journal articles and 120 other scholarly and popular publications.  He received a Ph.D. from Cornell University and a Bachelor of Arts from the University of Colorado.

We are honored to have these special guests at the conference and look forward to hearing their insights on the 2020 election and how it will shape Ohio’s politics.

A full look at the tentative agenda and registration is available here. 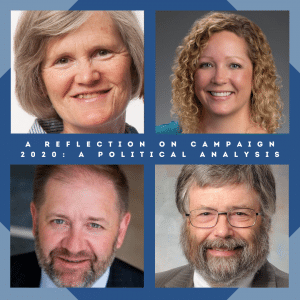