Immigration has Made Its Way into Ohio Politics 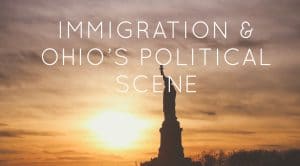 Immigration has made its way into Ohio’s politics, but how much has immigration impacted the state?

Immigration and Ohio are not often thought of in the same context, but as the issue increasingly plays a larger and larger role in national politics, the debate has found its way to the state.

In the recent Republican gubernatorial primary, a PAC affiliated with Lieutenant Governor Mary Taylor ran attack ads against her opponent, Attorney General Mike DeWine, trying to portray DeWine as ‘soft’ on immigration issues based on some of his past votes as a United States Senator. DeWine says he opposes ‘sanctuary cities’—cities that instruct their law enforcement agencies not to cooperate with Federal immigration authorities—and as Attorney General, DeWine joined a lawsuit seeking to reinstate President Trump’s executive order threatening funding cuts to ‘sanctuary cities.’

Immigration issues have also factored into the OH-12 special election between Republican State Senator Troy Balderson and Democrat Franklin County Recorder Danny O’Connor.  The Congressional Leadership Fund, a national Republican PAC supporting Balderson, ran an attack ad attempting to tie O’Connor to the ‘liberal resistance’ implying he supports permissive immigration policies. O’Connor stated he opposes getting rid of the Immigration and Customs Enforcement Agency (ICE), which some liberal groups are calling for, and that he supports tightening border security.

It’s unclear how Ohioans as a whole feel about immigration, but given that the state voted for President Trump by an eight-percentage point margin, it safe to say at least some Ohioans support the President’s approach to the issue.

With all the finger-pointing from Ohio’s politicians, it is perhaps useful to examine how much immigration actually affects Ohio.

Economists tend to agree that the ability to attract immigrants to an area is an indicator of its economic health.  It is sign of the strength of the local job market and the area’s appeal to outsiders.

Ohio’s economic picture likely explains its lack of success attracting immigrants. For years, Ohio has lagged behind the rest of the country in terms of economic growth and employment.

To make Ohio more welcoming to immigrants, Governor John Kaisch has bucked the restrictionist trend of his party. The Republican Governor says he welcomes immigrants, and his administration recently formed the Office of Opportunities for New Americans to help legal immigrants integrate into society and find jobs.