On Memorial Day, a wave of tornadoes tore through Ohio, leaving a trail or destruction in their wake. The tornadoes took one life, injured 130, and damaged several thousand buildings across 10 counties in the Miami Valley area.

The DeWine administration was quick to submit a 30-page letter requesting aid assessment to the Federal Emergency Management Agency (FEMA). To unlock FEMA money, emergency management officials were sent to assess the damage, determine the extent of destruction, and review how much government funding is available. This process determined how much, if any, federal aid Ohio would be eligible to receive.

Losses were determined to be beyond what Ohio state and local governments could handle, and a formal disaster declaration was submitted to a regional FEMA office. Ultimately, this request made its way to President Donald Trump, who had final authority over whether or not Ohio would receive federal dollars. Three weeks after the tornadoes hit, President Trump issued a disaster declaration. This allowed FEMA, as well as other federal disaster assistance agencies, to begin sending aid to affected areas. Residents in 10-approved counties were urged to apply for federal assistance.

In the meantime, local governments and community organizations mobilized to support regional recovery efforts. In Montgomery County, an area hit particularly hard, 650 residential addresses were declared uninhabitable. The county was able to secure $50,000 from the state, which they put towards a Mobile Career Resource Center committed to training and supporting those who lost work as a result of the tornadoes. Their local American Red Cross chapter opened 1,000 cases in an effort to assist those in need. Additionally, Montgomery County is looking to offer a one-year extension on the second half of taxes owed by those whose property values declined by at least 25% following the tornado. Such extension will require approval from the Board of Revisions. 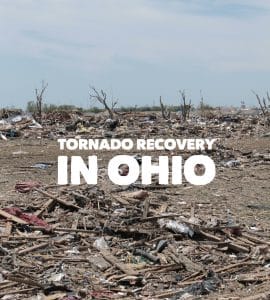