In 2018, business taxpayers were given the option to file a central municipal net profits tax return with the Ohio Department of Taxation (ODT) instead of with the Ohio municipalities in which the business taxpayers operate.  The Ohio General Assembly’s biennial budget bill last session provided taxpayers with this option, and also provided that the Ohio Tax Commissioner is to be the administrator for all municipal net profits tax filed with the ODT.  All filings are to be made through the state’s Ohio Business Gateway.  The ODT, encouraged by The Ohio Society of CPA’s and a coalition of business interests, pushed for these changes in hopes of streamlining Ohio’s municipal-income-tax structure to reduce red tape and make filing easier for taxpayers who have an obligation to file in multiple municipalities in which they do business.

This municipal net profits tax filing option marked an unpopular change for municipalities, who believe that the new tax collection approach infringes on the city’s right to collect its own taxes and sets a precedent for the state to collect additional municipal income taxes in the future.

The Regional Income Tax Agency (RITA), a municipal tax organization in Ohio, has administered and collected municipal taxes for more than 300 municipal entities in Ohio for nearly the past 50 years.  Several of RITA’s member municipalities joined many other cities and villages across Ohio in challenging the constitutionality of the state’s decision to provide taxpayers the option to file municipal net profit taxes with the state.  Municipal opponents believe this new option for the state to collect municipal net profit taxes violates the authority of municipalities to self-govern under Ohio’s home rule.  Municipalities have also raised questions as to whether the State of Ohio and the Ohio Business Gateway are ready to handle the processing and collection of filing across the state.

The Tenth District Court of Appeals in a 2-1 ruling upheld the budget provision that created the state’s ability to collect municipal net profits taxes.  The Ohio Supreme Court could be the next stop for a legal challenge.

Since the new system requires opt-in, the impact of this policy change has yet to be seen with only 3% of businesses choosing to opt-in to the state’s municipal net profit tax option in the first year.  The state hopes to save money and increase efficiency by eventually switching over to an entirely online system.  This would put the burden of dividing up municipal net profit taxes collected on the state rather than the taxpayer. However, opponents urge businesses to carefully weigh the decision to opt-in to the state’s system or continue to file municipal net profits with a tax administrator such as RITA or with each municipal entity that the business may owe. 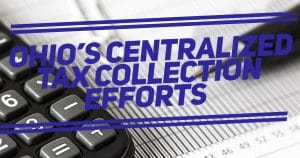