The “Midwest Connect” route is one of 10 final proposals that Virgin Hyperloop One (VHO) is considering for the first hyperloop track in the U.S.  The route would pass through Columbus, connecting Pittsburgh to Chicago.  VHO sent letters to every governor in the country to initiate the official Request for Proposal (RFP) process for a Hyperloop Certification Center.  The center will host the first hyperloop passenger product in the county and perform key safety tests required for certification.  17 states, including Ohio, submitted formal responses to the RFP.  VHO announced last year that its first international route will be built in India.

William Murdock, executive director of the Mid-Ohio Regional Planning Commission (MORPC), believes the Midwest Connect should be the first U.S. route.  The Columbus Dispatch reports that Columbus may have an advantage after beating 77 other U.S. cities in the 2015 Smart Cities Challenge and winning $50 million for smart-transportation systems.  Thea Walsh, Director of Transportation and Funding at MORPC, notes that this new mode of transportation could be strategically used to enhance current transportation systems.

In 2013, Elon Musk originated the idea for the hyperloop transportation system in a white paper, and VHO has since raised nearly $400 million from investors for development and implementation.  The hyperloop would propel autonomous, magnetically-levitating pods through a depressurized, vacuum-sealed tube at speeds up to 670 mph.  Routes would not be susceptible to inclement weather and VHO leadership claims that journeys could be powered purely using solar energy.  At these high speeds, the Pittsburgh Post-Gazette reports travel from Pittsburgh to Chicago would take approximately 58 minutes and a one-way ticket would cost around $93.  Traveling the 360 miles from Columbus to Chicago would take roughly 28 minutes.

Walsh notes that the system would be built in multiple stages. There could be something in place for fright and passengers for short distances in the 2020s, longer distances in the 2030s, and full development around 2050. MORPC is spending $2.5 million on a feasibility study and is working on an environmental study in anticipation for the project.  “These actions by MORPC break new ground,” said Virgin Hyperloop One CEO Rob Lloyd, “because they are integrating hyperloop technology into a larger environmental impact study—the first time that has happened anywhere in the world.”

A final cost estimate of installing the hyperloop system has not yet been settled.  Financing would likely require multiple public-private partnerships with government providing the right of way and stations along the system.  A private entity would then operate the system with support from other local businesses and organizations. The location of the first U.S. hyperloop development will be announced by the end of this year.  If the Midwest Connect route is selected, Ohio residents may be some of the first in the world with access to this new mode of transportation. 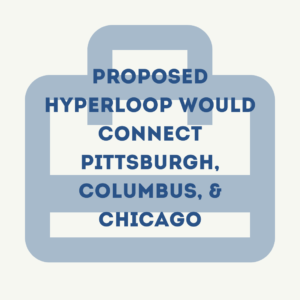