The Future of The Death Penalty in Ohio

Ohio has not exercised its legal right to capital punishment in nearly 19 months, sparking a statewide conversation about the necessity of the death penalty. In early 2019, a federal judge ruled unconstitutional the three drug combination used to carry out executions in Ohio. Witnesses testified that the lethal injection drugs evoked a painful drowning sensation when administered. The judge ruled them to be a source of “cruel and unusual punishment” and, therefore, in violation of the eighth amendment to the U.S. Constitution. Immediately following the ruling, Governor DeWine delayed an upcoming execution.

House Speaker Larry Householder, the leader of the GOP super-majority in Ohio, expressed his own concerns about the death penalty. Speaker Householder cited the extreme cost to taxpayers as a major concern. He added that GOP legislators are having continued discussions on the topic with mixed opinions. Senate President Larry Obhof stated that legislative action is unlikely to happen any time soon and continues to personally support the death penalty. House Minority Leader Emilia Sykes expressed her own apprehension due to the historical racial disparities in death sentencing, noting that capital punishment is more likely to be exercised on minorities.

The death penalty has long been a politically partisan issue and the politics of a state not only determine if capital punishment will be implemented, but also how frequently executions will occur. However, some Ohio Republicans have swayed from party alignment, coming out against the death penalty. The most recent form of opposition comes from the Ohio chapter of a conservative activist group known as Conservatives Concerned About the Death Penalty. The group is calling on lawmakers to completely abolish the death penalty in Ohio and has garnered the support of current and former GOP lawmakers including former Governor Bob Taft, former U.S. Rep. Pat Tiberi, former staffers of Governor John Kasich, Rep. Craig Riedel, Rep. Laura Lanese, and Rep. Niraj Antani. While no legislation has been introduced, representatives from the activist group state that Ohio could be seeing abolition within the year. They cite skepticism about the death penalty among Republican lawmakers based on the religious merits of execution.

In recent years, general public opinion on the death penalty has grown increasingly negative. According to a study conducted by Quinnipiac University in 2014, when it comes to Ohio, poll numbers reveal 68% of people in favor of the death penalty. However, if life in prison without the possibility of parole is listed as an alternative option, then only 47% favor the death penalty, and 36% favor the alternative. While the future if the death penalty in Ohio is unknown, conversations around the topic will not be ending any time soon. 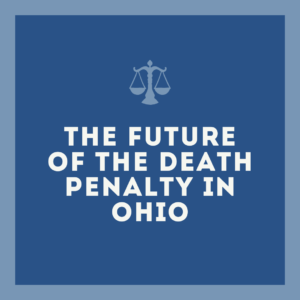