We are excited to announce Senate President Larry Obhof will speak at the 2019 Youngstown/Warren Regional Conference. President Obhof’s address will be from 12:20 p.m.-12:40 p.m. immediately following Secretary LaRose’s address at noon. Senator Obhof will discuss his plans and priorities as Senate President.

Larry Obhof serves as President of the Ohio Senate for the 133rd General Assembly.  As the presiding officer of the 33-member Senate, he is responsible for leading the Senate’s Majority Caucus as it sets the policy agenda for the two-year legislative cycle.  He is also responsible for the formal organization of the chamber, including recognizing members in debate, preserving order and decorum, calling for votes and signing all acts.

President Obhof proudly represents the people of the 22nd Senate District, which includes Medina, Ashland and Richland counties, as well as portions of Holmes County.  He is focused on improving Ohio’s economy, and has been a staunch advocate of fiscal responsibility, smaller and more efficient government, and lower taxes.  As a member of the Senate, President Obhof has sponsored legislation covering a wide range of issues including education, civil and criminal law, election administration, and taxation.  He has been described by newspapers as someone who has earned “a reputation as a lawmaker with a willingness to work across party lines.” Prior to his election as President of the Senate, he served as both President Pro Tempore and as Majority Whip.

President Obhof chairs the Ohio Senate’s Rules and Reference Committee, which determines which bills, resolutions and appointments are considered by the full Senate. He is Vice Chair of the Joint Legislative Ethics Committee, and Chair of the Legislative Service Commission, which oversees a staff that is responsible for providing members of the General Assembly with impartial and accurate information and reports concerning legislative issues. President Obhof also serves on the Intergovernmental Policy Advisory Committee on Trade (IGPAC), which provides policy advice to the U.S. Trade Representative on issues involving trade and development, including the impact and implementation of trade agreements.

President Obhof has received numerous honors in recognition of his work, including several “Legislator of the Year” awards. Among others, these include being named Watchdog of the Treasury by the United Conservatives of Ohio; Friend of Agriculture by the Ohio Farm Bureau Federation; Legislator of the Year by the Public Children Services Association of Ohio; Guardian of Small Business by the National Federation of Independent Business; and Small Business Advocate of the Year by the Greater Cleveland Partnership/Council of Smaller Enterprises. In 2015, he received the Outstanding Legislator Award from the Ohio Society of Certified Public Accountants. In 2018, President Obhof received the Ohio State Bar Association’s Lawyer-Legislator Distinguished Service Award.

In addition to his legislative duties, President Obhof is an attorney, and he has taught courses on civil procedure and legislation as an adjunct law professor.  He graduated with degrees in Economics, History, and Political Science from The Ohio State University and earned his law degree from Yale Law School. President Obhof resides in Medina with his wife, Nicole, and their three daughters. 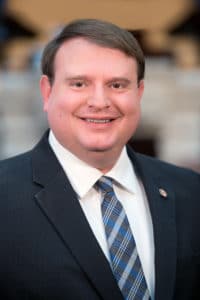