Sprague & Obhof to Speak at the 2019 Canton Regional Conference

Impact Ohio is excited to announce the elected officials speaking at the 2019 Canton Regional Conference on Thursday, December 12 at Stark State College.

Treasurer Robert Sprague and Senate President Larry Obhof will both be joining us to discuss their priories and plans for their respective offices.

Treasurer Sprague will speak from 12:00 p.m.-12:20 p.m. Treasurer Sprague began his career in public service in his hometown of Findlay as both city auditor and treasurer. In Findlay, he balanced city budgets and helped finance a massive recovery effort after historic floods and the 2008 economic recession. Treasurer Sprague represented Ohio’s 83rd House District from 2011 to 2018. As a legislator, Treasurer Sprague was a leading voice on fiscal matters as a member of both the House Finance and Financial Institutions Committees. While in the private sector, he was a project lead at Ernst & Young and worked on a number of high-profile engagements with Fortune 500 companies before forming his own consulting firm.

Senate President Obhof will speak from 3:15 p.m.-3:30 p.m. As the presiding officer of the 33-member Senate, President Obhof is responsible for leading the Senate’s Majority Caucus as it sets the policy agenda for the two-year legislative cycle.  He is also responsible for the formal organization of the chamber, including recognizing members in debate, preserving order and decorum, calling for votes and signing all acts. President Obhof proudly represents the people of the 22nd Senate District, which includes Medina, Ashland and Richland counties, as well as portions of Holmes County.  He is focused on improving Ohio’s economy, and has been a staunch advocate of fiscal responsibility, smaller and more efficient government, and lower taxes. Prior to his election as President of the Senate, he served as both President Pro Tempore and as Majority Whip. In addition to his legislative duties, President Obhof is an attorney, and he has taught courses on civil procedure and legislation as an adjunct law professor.

We looking forward to having these elected officials join us in the conversation surrounding politics and public policy in the Canton area. 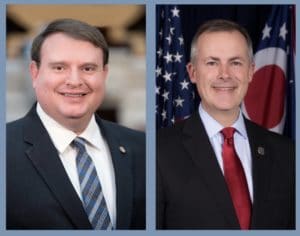