Canton Regional–Election 2020: From the White House to the Statehouse

The 2019 Impact Ohio Canton Regional Conference is on Thursday, December 12 at Stark State College from 11:00 a.m.-4:30 p.m. The conference will offer attendees the opportunity to hear first-hand from elected officials, business leaders, and local experts on issues important to the community. There will be three policy sessions throughout the day.

“Election 2020: From the White House to the Statehouse” will begin at 2:15 p.m. This panel will discuss the role that Ohio and the Canton region will play in the 2020 presidential election.  Additionally, you can expect a conversation about the Ohio General Assembly and what to expect for other 2020 campaigns and races.  This will be a discussion between two highly esteemed professionals working in politics, Derrick Clay and Robert Paduchik, moderated by Tom Walsh.

Derrick Clay has had an established career in Ohio politics and business. Mr. Clay joined New Visions Group in 2004 and assumed the title of President/CEO when he acquired the firm in 2014. Previously, he served as Midwest Political Director for the Democratic Congressional Campaign Committee, Ohio State Director for the Gore-Lieberman 2000 Presidential Campaign, and a staff member of the historic Florida Recount Committee.  He also was the Ohio State Director for the Service Employees International Union (SEIU) Hero Program and Field Director for the Ohio Democratic Party.  Early in his career, Mr. Clay served as the Executive Director of the Ohio Legislative Black Caucus (OLBC), as a legislative aide in the Ohio House of Representatives to former Assistant Majority Leader, and Finance Committee Chair Vernon Sykes and to the late Representative Jack Ford. He graduated from the University of Akron with a degree in business and organizational communication.

Robert Paduchik is an accomplished strategist with three decades of experience leading political and public affairs campaigns. He is recognized by many political professionals as one of the “outstanding campaign managers in America” and an expert in Ohio politics. Mr. Paduchik has gained extensive experience advising Republican campaigns at the local, state, and federal level. He is a proven leader of multi-million dollar initiatives representing the energy sector and other industries. He currently serves as a Senior Advisor for Donald Trump’s 2020 Presidential Re-Election Campaign. He was also the campaign’s Ohio state director in 2016 and was Co-Chairman of the Republican National Committee from 2017-2019.

Tom Walsh is currently the Vice President of the Ohio Association of Community Colleges where he oversees advocacy and public policy initiatives in order to advance the missions of Ohio’s public community colleges.  Previously, Mr. Walsh was the Associate Vice President of State Relations at The Ohio State University.  In 2010, he was Special Assistant to Governor Strickland for regulatory reform.  Before that, he held the positions of Government Relations Director at Anthem Blue Cross & Blue Shield and Legislative Director at the Ohio Department of Taxation.

We look forward to having these experts discuss politics on a local, statewide, and national level. 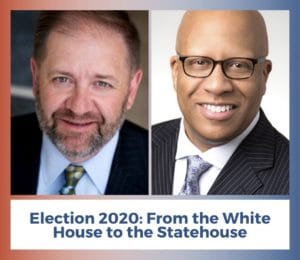