The State of Coronavirus Preparedness in Ohio

With 50 confirmed coronavirus cases as of March 26, the state of Ohio has enacted a variety of prevention tactics and response plans to combat the spread of the illness. On March 9, Governor DeWine declared a state of emergency to allow state departments and agencies to respond appropriately to the pandemic. This early decision highlighted the administration’s willingness to get out in front of the spread of coronavirus in Ohio. According to the Centers for Disease Control and Prevention (CDC), it is these early actions that are important in preventing community spread and easing the burden of the pandemic on health systems.

Governor DeWine and Ohio Department of Health (ODH) Director Amy Acton have been diligent in addressing the public daily and rolling out a series of orders meant to prevent community spread and preserve public health in Ohio. This began with a ban on mass gathering of 100 or more, now down to gatherings of 50 or more, leading to the cancelation and postponement of major sporting events, conferences, parades, fairs, and festivals across the state. Governor DeWine also ordered a halt on all visitation to nursing homes and detention facilities statewide.

This was followed by the closure of all Ohio K-12 schools through April 3, with the potential for extension through the academic year. The Ohio State University joined other higher education institutions across the nation in suspending all face-to-face education and transitioning to virtual learning only. Additionally, The Ohio State University mandated that all students living on campus return to their permanent place of home residence for the remainder of the semester.

Most recently, Governor DeWine ordered the closing of all bars and restaurants in Ohio to the public, allowing for carry out and delivery orders only. Bowling alleys, movie theaters, gyms, and certain other business have also been ordered to close as well. In response to concern over job loss, Governor DeWine signed an executive order to provide unemployment assistance to those whose jobs might be impacted during this time. The order allows employees without paid leave to access unemployment benefits without the typical one week waiting period. In addition, the cost of the benefits will be mutualized for businesses and unemployment penalties will be waived if deadlines are missed.

With the March 17th Ohio primary election set for Tuesday, Ohio Secretary of State Frank LaRose previously announced changes to roughly 75 poling locations. Several locations were set to be in nursing homes, and due to the virus’s higher mortality rate amongst the elderly, new poling locations were announced via mail to all impacted voters. With concerns over community spread threatening to keep some Ohioans home on election day, Secretary LaRose also ordered all county boards of elections to offer curbside voting. Ultimately, Governor DeWine and Secretary LaRose announced the postponement of the primary election until June 2. In a statement, Governor DeWine noted groups vulnerable to coronavirus should not have to decide whether or not they can vote.

For more information on the virus visit the ODH’s informational portal at www.coronavirus.ohio.gov or reach out to the Ohio coronavirus call center at 883-427-5634. 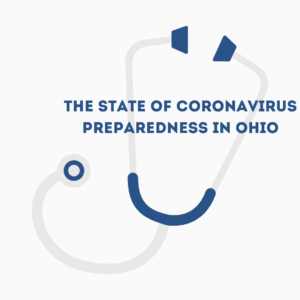