“The State of Healthcare and Medicaid in Ohio” Panel Announced

Impact Ohio is pleased to announce the panelists for “The State of Healthcare and Medicaid in Ohio” session at the 2020 Post Election Conference.  We have invited healthcare policy experts to discuss Medicaid and the state of healthcare in Ohio.

The 2020 Post Election Conference will be virtual on Thursday, November 5. “The State of Healthcare and Medicaid in Ohio” will run from 3:30 p.m.-4:30 p.m. Attendees will be able to ask questions of the panelists and interact with other attendees through the conference’s virtual platform.

The panel will be moderated by Todd Baker and panelists will include Mike Abrams, ODM Director Maureen Corcoran, and Kelly O’Reilly.

Todd Baker was named CEO of the Ohio State Medical Association in January 2017. He has been co-CEO of the organization since 2014, overseeing day-to-day operations. Baker works closely with OSMA members, staff, and Council to assure the OSMA’s future strategic planning is aligned with the organization’s mission, vision and values. Additionally, he directly manages the activities of a number of state specialty societies. Prior to joining the OSMA, Baker was executive director for the Ohio Ophthalmological Society. He currently serves on a number of different medical association work groups and task forces both in Ohio and at the national level. He received a B.A. with Honors in Economics from Oberlin College and an M.P.A.F.F. with concentration in health from the LBJ School of Public Affairs at the University of Texas.

Mike Abrams joined the Ohio Hospital Association in 2012 as president and CEO. He leads a team of more than 50 associates, supports a 20-member Board of Trustees, serves on a variety of health care and hospital taskforces and committees and works with the 2,400 members of seven OHA-affiliated societies to guide the association toward its mission of collaborating with member hospitals and health systems to ensure a healthy Ohio. Abrams works closely with hospital and health system executives and leaders to assess health care trends and policies impacting the industry. He chairs the State Hospital Association Executive Forum and he has been appointed to Ohio Gov. Mike DeWine’s Executive Workforce Board. Prior to OHA, Abrams was the executive vice president and CEO of the Iowa Medical Society from 1996 to 2012. He previously led government relations for the Indiana State Medical Association for nine years and is a graduate of Indiana University where he earned a bachelor’s degree in Political Science and a master’s degree in Public Administration. Abrams’s additional leadership experience includes service on the boards of the Midwest Medical Insurance Company and the Iowa Healthcare Collaborative, a joint effort between the Iowa Medical Society and the Iowa Hospital Association to promote a health care culture of continuous improvement in quality, patient safety and value in the state.

State Medicaid Director Maureen Corcoran oversees the Ohio Department of Medicaid. Director Corcoran began her career in public service in 1984. Through her various leadership positions in state government, she was instrumental in Ohio’s nationally recognized mental health systems reforms and other interagency initiatives that improved the quality of health services in Ohio. In 2008, she returned to state government to direct policy and program initiatives for Ohio Medicaid under the Ohio Department of Job and Family Services. Outside of state government, Director Corcoran has used her extensive knowledge and experience to advocate for individuals with developmental disabilities and help health care providers, government agencies, professional associations and other stakeholders respond to the complex needs of health care consumers by developing and implementing innovative policies and programs. Director Corcoran received her undergraduate degree from the University of Rochester. She went on to earn her Master in Business Administration degree from Case Western University, with a concentration in finance and health care, and a Master of Science in Nursing degree from Frances Payne Bolton School of Nursing, Case Western Reserve.

Kelly O’Reilly is President and CEO of the Ohio Association of Health Plans (OAHP). On behalf of Ohio’s health insurance industry, OAHP promotes public policy that supports increased access to and improved quality of care while also addressing the crisis of skyrocketing health costs. O’Reilly’s legislative experience began when she worked as a page in the Ohio Senate while attending the Ohio State University.  After earning her degree in Political Science, O’Reilly then turned her focus to the law, graduating from Capital University Law School in 1996. At the start of her legal career, O’Reilly worked as a judicial clerk in both state and federal courts and as an associate at the law firm, Vorys, Sater, Seymour & Pease, in Columbus, Ohio.  She also served as Director of Legislative Affairs for the Ohio Home Builders Association.  Before joining OAHP, She worked for 18 years as the Senior Director of Governmental Affairs at Governmental Policy Group. 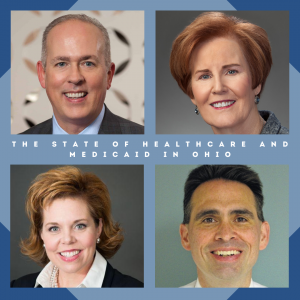