The 134th General Assembly has begun, and there are six new senators, all Republicans, joining the legislative body. Several of the freshmen senators are familiar with the statehouse as they most recently served as representatives for their districts in the House. We are excited to welcome these new senators to Ohio’s upper legislative chamber.

George Lang (R), representing the 4th State Senate District (Butler County), won this seat from incumbent Senator Bill Coley (R), who retired in 2020. Sen. Lang was previously the Representative for House District 52, where he was assigned to the Insurance, Financial Institutions, and Economic and Workforce Development Committees. He most recently served as the Chair of the Criminal Justice Committee. Before running for office, Sen. Lang worked in sales/management, consulting, and financial services. His policy interests include the economy, small government, criminal justice, Right to Life, and the protection of the Second Amendment.

Niraj Antani (R), representing the 6th State Senate District (Montgomery County), was elected following the retirement of the district’s previous senator, Peggy Lehner (R). Sen. Antani was previously the Representative for House District 42, where he was the youngest serving member in the House at that time. In 2015, Sen. Antani was on Forbes “30 under 30” list for Law & Politics. While in the House, he was assigned to the Health and Public Utilities Committees, while also serving as the Vice Chair for the Insurance Committee. Sen. Antani has always been involved in politics, as he worked as a congressional aide and political advisor before becoming a State Representative. His policy interests include Right to Life, protection of the Second Amendment, and Medicaid.

Jerry Cirino (R), representing the 18th State Senate District (Portage County, parts of Lake and George Counties), was elected following the retirement of the previous senator to this district, John Eklund (R). Unlike many of his colleagues, Cirino’s path to the State Senate did not begin with terms in the Ohio House of Representatives. Prior to his campaign, he was the Lake County Commissioner after his retirement from being a business executive in the medical device industry. Cirino is the founding CEO of a successful medical device company, SourceOne Healthcare Technologies. His policy interests include the economy, criminal justice, senior citizens, small government, and education.

Mark Romanchuk (R), representing the 22nd State Senate District (Medina, Ashland, Richland Counties, part of Holmes County), was elected after the retirement of former Senator and Senate President, Larry Obhof (R). Prior to securing a senate seat, Sen. Romanchuk served as the Representative for House District 2. In the 2019-2020 General Assembly, he was assigned to the Finance and Health Committees, as well as the Joint Medicaid Oversight Committee for the Ohio State Legislature. Sen. Romanchuk has a strong background in manufacturing as both a business owner and an engineer. His policies focus on the economy, lower taxes, small government, Right to Life, and manufacturing.

Sandra O’Brien (R), representing the 32nd State Senate District (Ashtabula and Trumbull Counties, parts of Geauga County) beat incumbent Senator Sean O’Brien (D) in an incredibly tight and newsworthy race. Sen. Sandra O’Brien was an educator and former Ashtabula County Auditor. She ran on a platform aligning herself and her policies with those of President Trump. During her senate term, her policies will focus on lower taxes, education, Right to Life, environment, and energy independence.

Bill Reineke (R), representing the 26th State Senate District (Sandusky, Seneca, Wyandot, Crawford, Morrow, Marion and Union Counties) was elected following the retirement of previous State Senator, Dave Burke (R). Sen. Reineke previously served as the Representative for House District 88 where he was assigned to the Ways and Means Committee, Economic and Workforce Development Committee, and served as the Vice Chair on the Aging and Long-Term Care Committee. Sen. Reineke is a business partner at Reineke Family Dealerships, where he still works with many members of his family, including his father. Together they own 8 car dealerships in Ohio. Sen. Reineke’s policy interests include Right to Life, the economy, small government, energy, business, and development. 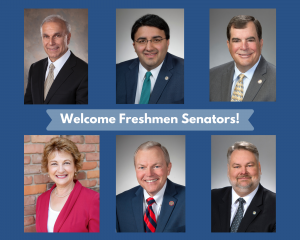