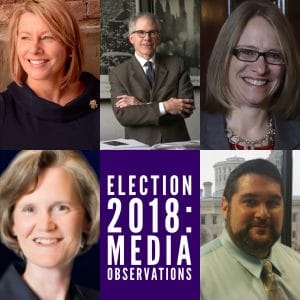 As the 2018 Impact Ohio Post Election Conference nears, we are excited to announce the panelists for the “Election 2018: The Media’s Observations.” Impact Ohio has invited experts in journalism and reporting to share their thoughts on Election Day results and what role media has played in the 2018 election season.

“Election 2018: The Media’s Observations” will be the second plenary session at the Post Election Conference on Thursday, November 8 at the Greater Columbus Convention Center.  The session will run from 9:45 a.m.-10:45 a.m. in the Union Station Ballrooms AB.

Laura Bischoff, Statehouse Reporter for the Dayton Daily News, has been working in media since 2001. With a multitude of breaking stories, Bischoff brings extensive knowledge of state and local government.

Julie Carr Smyth, Statehouse Correspondent for the Associated Press, has covered the Ohio Statehouse for 18 years. Carr Smyth began as an investigative reporter and currently works as a lead correspondent.

Jim Siegel, Statehouse Reporter for the Columbus Dispatch focuses his work on the policy and politics of the Ohio General Assembly. Siegel has reported on the last seven state budgets and has extensive knowledge of the Ohio election process.

We are honored to have these special guest at the conference and look forward to hearing their insights on this important topic.