What’s the Future of Medicaid under Ohio’s Next Governor?

The political fights over Medicaid will likely continue as the costs of healthcare continue to rise and Medicaid takes up a larger and larger chunk of the state and federal spending. That said, the program has demonstrated considerable durability against political challenges and is certain to remain in some form for the foreseeable future.  That means Ohio’s next Governor will have to adopt and implement their own approach to Medicaid.

Governor Kasich’s decision to expand Medicaid in 2014 as part of the healthcare changes from the Affordable Care Act (ACA) was not without controversy.  Opposition in the Republican-held General Assembly forced the Administration to get approval for the change from the state Controlling Board, a smaller fiscal oversight body that handles adjustments to the state budget, instead of the General Assembly.  Since then, Republicans at the Statehouse have made several attempts to limit Medicaid enrollment and reduce state spending on the program, only to have those changes vetoed by Governor Kasich.

In addition to expansion, the Kasich administration has made other changes to Medicaid in Ohio. Through its Office of Health Transformation, the administration has begun a redesign of the behavioral health system and prioritized of community and home-based services, among other reforms.

In the current GOP gubernatorial primary, Medicaid expansion is among the most contested issues. Lieutenant Governor Mary Taylor says she opposes expansion and would roll back the program if elected Governor despite her public support of Gov. Kasich’s decision to expand Medicaid back in 2014.  Attorney General Mike DeWine says he believes the program is fiscally unsustainable but has not said he would undo expansion.

For Democrats, protecting Medicaid is a rallying point.  All remaining Democratic gubernatorial candidates express support for the program, and credit it with playing a vital role in providing treatment to those affected by the opioid crisis.  And despite deep opposition from many in the GOP, Medicaid and the ACA had enough support among some Republicans in Congress that efforts to repeal the ACA and Medicaid expansion last summer were stifled.

What the next administration will do with Medicaid is not yet certain, but its impact on the 3 million Ohioans covered by Medicaid and all Ohioans paying federal and state taxes will no doubt be felt.

To learn more about the future of Medicaid under Ohio’s next governor, be sure to register for the 2018 Post Election Conference, where a panel of lawmakers and experts will discuss the program in depth. 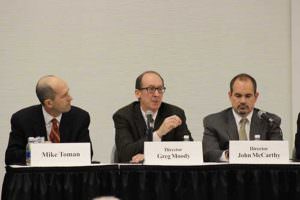