At the 2017 Impact Ohio Regional Conferences, the opiate crisis was one of the big issues discussed.  In Akron, Cincinnati, and Dayton we heard from numerous experts about the seriousness of the crisis and how it affects public health as well as social and economic welfare.  Our experts shared what their communities were doing to fight the crisis and how communities are being forced to think out of the box and explore new solutions for attacking the epidemic.

Many communities realize that reducing further harm to those suffering from addiction is growing in importance.  One harm reduction strategy is known as Syringe Exchange Programs (SEPs). SEPs are focused on providing drug users with new needles in hopes of reducing the spread of blood borne diseases which are commonly associated with the injection and sharing of needles.  Once seen as quite controversial, SEPs have grown to be more mainstream.

Changes to Ohio law allow local health boards to create SEPs without having to declare a public health emergency, but there must be measurable community support before such programs are implemented. Once approved, funding can still be a concern, as there is no dedicated state funding for SEPs and most rely on private donations in order to operate.

Many SEPs have grown to be much more than a needle exchange site, often serving to connect clients with anonymous medical testing, naloxone kits, PrEP referrals, medical care, mental health services, addiction and recovery services, and sexual assault services.  Some SEPs are stationary sites while others take on the form of a moving truck intended to service a greater area. 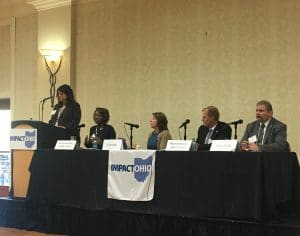