A new economic development tool called Opportunity Zones, could bring new, private investments to economically distressed communities in Ohio and across the country.

In December of last year, Congress passed the Tax Cuts and Jobs Act of 2017 which overhauled and reformed the United States’ mammoth federal tax code.  Within this complex piece of legislation, Opportunity Zones were created to make development or redevelopment projects in economically distressed areas more attractive to private sector investment.

Under the program, the United State Department of Treasury and the Internal Revenue Service allowed states to submit up to 25% of their total census tracts for consideration as an Opportunity Zone.

In Ohio, government and business groups gave census tract recommendations to the Ohio Development Services Agency. Then the Governor’s Office devised a list of census tracts to nominate for eligibility.  Ohio submitted a total of 320 of the 1,280 eligible census tracts to the Federal Government.  All 73 counties in which eligible tracts were submitted, have tracts designated by the U.S. Treasury.

Investors who choose to invest within these designated zones can receive certain tax benefits on their investments in two different ways.   First, investors can defer tax on capital gains made until December 31, 2026, so long as the gain is reinvested in an Opportunity Zone. Second, if the investor holds the investment in the Opportunity Zone for at least ten years, the investor would be eligible for an increase in basis equal to the fair market value of the investment.

At the 2017 Impact Ohio Regional Conferences in Toledo, Cincinnati, Akron, and Dayton, the need for economic development tools was discussed.  This program is a great example of that intersection of people, policy and politics.  Opportunity Zones, which have been awarded in all four Impact Ohio communities  allows for private investors to work with state and local governments to advance economic development initiatives within their own communities.

Want to see where within the Impact Ohio communities there are Opportunity Zone designations? See below for maps of their various census tracks that are now eligible for Opportunity Zone investments or check out the map available here. 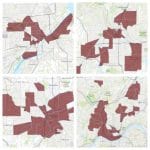