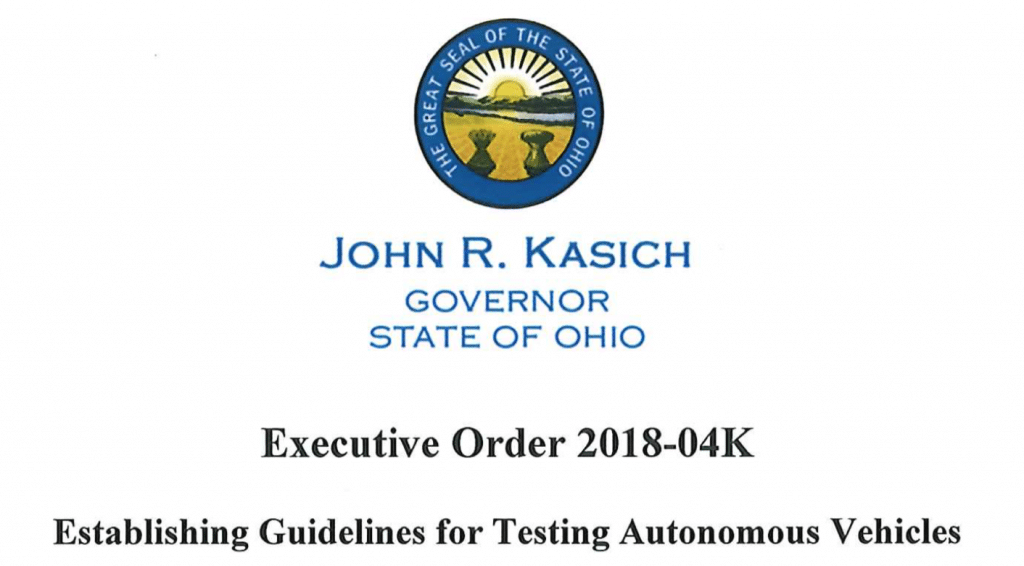 As autonomous vehicles continue to change the way we view transportation, Governor John Kasich issued a timely executive order to ensure Ohio remains at the forefront of this growing industry.  On May 9,  Kasich issued Executive Order 2018-04K to permit the testing of autonomous vehicles on all roads and highways in Ohio.  The order also provides government and private industries with guidelines and regulations to ensure the safety of pedestrians, bicyclists, and other motorists on the road.

Autonomous vehicles are being touted nationwide as one of the most effective ways of reducing traffic, roadway congestion, and most importantly vehicle related accidents and fatalities.  Nearly 80% of all serious crashes as the result of driver error could be avoided with the use of autonomous transportation technology.  As major cities around the world begin rolling out plans to incorporate driverless technology into their transportation systems, Ohio hopes to better prepare for the autonomous vehicle revolution.

Ohio’s advantageous terrain allows autonomous vehicle manufactures to test in a variety of locations and environments. Urban, suburban, and rural locations allow for a range of roadway testing from the controlled streets of the Transportation Research Center in East Liberty to the Route 33 Smart Corridor connecting Columbus to Marysville.  Ohio’s everchanging climate also allows for autonomous vehicles to be put to the test in everything from harsh winter conditions to a crisp summer day.  The four-season climate and vast range of infrastructural settings is advantageous to technicians who strive to guarantee autonomous vehicle functionality in various terrains across the nation.

Since 2011, Ohio has invested nearly $14 billion in infrastructure projects, making its roads among the safest and most “autonomous ready” in the country.  Rapidly developing technology requires rapid testing and this executive order hopes to ensure Ohio fast-tracks the testing of autonomous vehicles, bringing them into the mainstream and securing the future jobs of Ohio.