In early 2018, elected leaders from Toledo and surrounding communities signed a Memorandum of Understanding creating the framework for the Toledo Area Water Authority (TAWA).  For years the City of Toledo has supplied water to many communities in the surrounding region, but the water system, including the Collins Park Water Treatment Plant, remained under city control.  With the agreements under which the city provides water to these communities set to expire, and recognition by local leaders that the region would benefit from a regionally governed water system, the Toledo Regional Chamber of Commerce spearheaded an effort to move talks forward on a regional water management authority.  Subsequent talks generated the proposed Toledo Area Water Authority.  The independent authority would be led by a board of professionally qualified directors appointed by participating communities and would oversee water resource management, planning, and rate setting.

The Toledo Area Water Authority will likely need approval by the residents of the Toledo in November before it takes effect.  Though supported by suburban communities, some City of Toledo residents are resistant toward creating a regional water authority.  Their concerns are that regionalizing water management may lead to rate increases for Toledo residents and that the city would be giving up an important asset in its water system.  Former Toledo Mayor Carty Finkbeiner specifically objects to the city giving up control of the Collins Park Water Treatment Plant, which he says has received a billion dollars of investments from the city.  The Toledo Blades reports that the city has not spent a billion dollars on the plant rather hundreds of millions and much of that money came from federal grants and revenues from water rates.  Proponents of the water authority also note that the city’s water system must make $500 million of Ohio EPA mandated improvements and that distributing the cost among a larger constituency would be preferable to the city’s residents shouldering those costs alone.

Current Toledo Mayor Wade Kapszukiewicz is committed to finding a solution.  In a video on the city’s website, he says that if a deal is not reached, suburban partners will start looking for other options as some have already done. Without those partners, Kapszukiewicz says the citizens of Toledo could face water rates triple that of current rates. “Doing nothing would be the worst possible thing we could do,” says Kapszukiewicz.

“We cannot unlearn what we have learned about the management of the water system over the past year” said Wendy Gramza, president and CEO of the Chamber. Although keeping the region from fracturing over water was the initial goal, a number of other issues such as developing programs to assist low-income residents and full lead service line replacement are also key components of a water system implementing industry best management practices. Gramza added that “these issues are important to the business community because they directly impact the health and safety of the water system and its customers.”

While the Toledo Area Water Authority might not get much statewide coverage, it matters a great deal to the Toledo region. Impact Ohio sets out to bring together important regional partners to discuss issues facing their communities at our conferences.  Both the Toledo Chamber of Commerce and Mayor Kapszukiewicz were participants in last year’s Impact Ohio Toledo Regional Conference, and Impact Ohio looks forward to returning to the region. 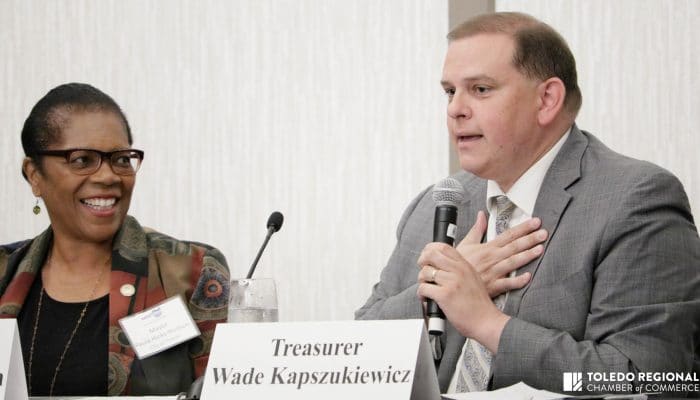