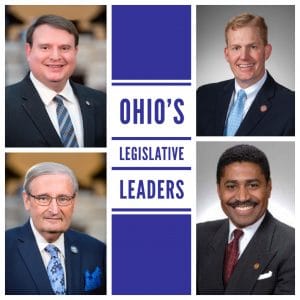 Senate President Larry Obhof (R-Medina) is responsible for leading the Senate’s Majority Caucus as it sets the policy agenda for the 132nd General Assembly. He has spent his career in public service working to improve Ohio’s economy and advocating for fiscal conservatism, lower taxes, and smaller government. President Obhof Chairs the Rules and References Committee, the Joint Legislative Ethics Committee, and the Legislative Service Commission. In addition, President Obhof has received numerous “Legislator of the Year” awards and is a graduate of The Ohio State University and Yale Law School.

House Speaker Ryan Smith (R-Bidwell) is currently serving his third term in the Ohio House of Representatives as the 103rd Speaker of the House. Speaker Smith graduated with a Bachelor of Science in Finance from The Ohio State University and has had an extensive career working as a financial advisor. In addition, Speaker Smith is actively involved in his community and has served on the Gallipolis City School Board and the Gallia County Chamber of Commerce. Speaker Smith spent two terms as Chairman of the Finance Committee, and continues to prioritize Ohioans’ needs by tackling issues related to the opioid epidemic and workforce development.

Senate Minority Leader Kenny Yuko (D-Richmond Heights) attended Kent State University before joining the workforce and going on to become a union organizer for 25 years. After retiring, he ran for The Ohio House of Representatives in 2004. Senator Yuko has spent his public service career with the goal of protecting working families, promoting health care access, and improving Ohio’s economy. Senator Yuko served as Chairman of the Commerce and Labor Committee in addition to serving on the Health and Aging and Veterans Affairs Committees. Senator Yuko has received various awards that highlight his efforts in improving Ohio’s communities.

We look forward to hearing from these legislative leaders on November 8th as they discuss their plans for Ohio following the election and moving into the future.