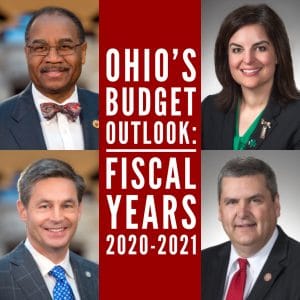 As the 2018 Post Election Conference nears, we are excited to announce the panelists for “Ohio’s Budget Outlook: What’s on the Horizon for Fiscal Years 2020-2021.” Impact Ohio has invited legislators from across the state to discuss Ohio’s budget plan and to share their ideas on creating an efficient budget that works to improve the lives of Ohioans.

“Ohio’s Budget Outlook: What’s on the Horizon for Fiscal Years 2020-2021” will be the concluding discussion at the Post Election Conference on Thursday, November 8 at the Greater Columbus Convention Center. The session will run from 3:00 p.m.-4:00 p.m. in Union Station Ballroom AB.

McKenzie Davis from The Success Group will moderate the panel. Davis has extensive experience in politics and public affairs, starting his career by working in the White House Communications Office. Davis earned his J.D. from Capital University Law School and served as the Director of Government Affairs for the Ohio Academy of Nursing Homes prior to joining the Success Group.

Senator Matt Dolan (R-Chagrin Falls) is a graduate of Case Western Reserve School of Law. In addition, he is a former Chief Assistant Prosecutor for Geauga County and a former Assistant Attorney General for the State of Ohio. Before joining the Ohio Senate, Senator Dolan served three terms in the Ohio House of Representatives and was Chairman of the Finance and Appropriations Committee. Senator Dolan has extensive experience in both the private and public sectors and currently serves on the Senate Finance Committee.

Representative Scott Ryan (R- Newark) is currently serving his second term in the Ohio House of Representatives. He graduated from Miami University with a Bachelor of Science in Business Administration and has been the owner of a printing company for 27 years. Representative Ryan previously served as Licking Country Treasurer and currently serves on various committees, including the House Finance Committee and Ways and Means.

Senator Vernon Sykes (D- Akron) has had a long career in public service as a former member of both Akron City Council and the Ohio House of Representatives. While serving in the House of Representatives, Senator Sykes was Chairman of the House Finance and Appropriations Committee and Co-Chair of the Budget Planning and Management Commission. Senator Sykes is a professor of Political Science at Kent State University and holds a Ph.D. in Public Administration from the University of Akron.  Currently, Senator Sykes serves on the Senate Finance Committee.

We look forward to having these guests speak at the 2018 Post Election Conference and hearing their insight on Ohio’s budget moving into the future.