Impact Ohio is excited to announce our speakers for the 2019 Dayton Regional Conference on Thursday, October 10 at Daniel J. Curran Place at the University of Dayton. Our speakers will include:

Lt. Governor Husted, the 66th Lt. Governor of Ohio, will deliver the luncheon address at 11:30 a.m. He has had a long and distinguished career in public service, serving as the 50th Secretary of State, 99th Speaker of the Ohio House of Representatives, and as a member in the Ohio Senate. After receiving his master’s degree from the University of Dayton, he remained in the Miami Valley and served as the Vice-President for Economic Development at the Dayton-Area Chamber of Commerce.

Mayor Whaley will speak at 12:00 p.m. She was first elected to the Dayton City Commission in 2005 and was the youngest woman ever chosen for a commission seat. Mayor Whaley was elected mayor of Dayton in 2013, and in 2017 she was re-elected without opposition, a first in Dayton’s history. As mayor, she focuses on areas including community development, manufacturing, and women and children. Mayor Whaley serves on the Board of Trustees for the US Conference of Mayors as well as the Chair of the International Committee for the conference. She is a founding member of the Ohio Mayors Alliance, a bi-partisan coalition of mayors from Ohio’s largest urban and suburban communities

Secretary LaRose, Ohio’s 51st Secretary of State, will address conference attendees at 12:15 p.m. He previously served two terms as a member of the Ohio Senate from Ohio’s 27th Senate District. Secretary LaRose was named the Legislator of the Year in 2016 by the Ohio Association of Election Officials in recognition of his support and commitment to improving Ohio’s election process. He served in the US Special Forces as a Green Beret and received numerous commendations and honors, including the Bronze Star. He is the Jr. Vice Commander of the Fairlawn VFW, and as an Eagle Scout himself, he now serves on the executive board for his local Boy Scouts of America Council.

Treasurer Sprague, Ohio’s 49th Treasurer of State, will speak in the afternoon at 2:00 p.m. He began his career in public service in his hometown of Findlay as both city auditor and treasurer. Treasurer Sprague represented Ohio’s 83rd House District from 2011 to 2018. While in the private sector, he was a project lead at Ernst & Young and worked on a number of high-profile engagements with Fortune 500 companies before forming his own consulting firm. 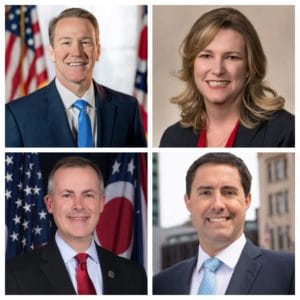