Impact Ohio is excited to announce our speakers for the 2019 Southeast Regional Conference on Thursday, November 7 at the Ohio University Inn & Conference Center. Our speakers will include:

Mayor Patterson will offer a conference welcome at 11:45 a.m. He is a 1988 graduate of the University of North Dakota where he majored in Psychology with a minor in Biology. He continued his education at the Uniformed Services University of the Health Sciences in Bethesda, Maryland where he earned a Doctor of Philosophy in Health Psychology in 1993. He served in the United States Air Force for 23 years in both the Enlisted and Commissioned ranks and retired in 2003 as a Major with the District of Columbia Air Nation Guard 113th Fighter Wing. Mayor Patterson lives in Athens where he was an Associate Professor of Health Psychology at Ohio University for 18 years until he began his first term as Mayor in January 2016. Prior to being elected Mayor, he served as an Athens City Council At-Large member from 2012-2015.

Representative Edwards will discuss the priorities & plans for the Ohio House of Representatives at 12:00 p.m. He represents the 94th Ohio House District, which includes Athens, Meigs, Washington, and Vinton Counties and is serving his second term. Representative Edwards was born and raised in Nelsonville. He attended Ohio University on a football scholarship, receiving his degree in Mathematics. While in college, he started investing in local real estate and was able to grow that business throughout his college career. He also earned a real estate license to start representing buyers and sellers in the area. He is a small business owner, a realtor, and a property investor. Recently, Representative Edwards began working in medical sales within the drug abuse and treatment market. With an understanding of addiction and health insurance, Representative Edwards knows that this is a critical issue for Ohio’s 94th District.

Secretary LaRose will address conference attendees at 1:45 p.m. He previously served two terms as a member of the Ohio Senate from Ohio’s 27th Senate District. Secretary LaRose was named the Legislator of the Year in 2016 by the Ohio Association of Election Officials in recognition of his support and commitment to improving Ohio’s election process. He served in the US Special Forces as a Green Beret and received numerous commendations and honors, including the Bronze Star. He is the Jr. Vice Commander of the Fairlawn VFW, and as an Eagle Scout himself, he now serves on the executive board for his local Boy Scouts of America Council.

Dr. Nellis, President of Ohio University, will speak at 2:00 p.m. Dr. Nellis is an internationally recognized scholar and national higher education leader. He brings nearly four decades of experience in academia as a president, provost, dean, and professor to Ohio University. Prior to arriving at Ohio University, Dr. Nellis was president of both Texas Tech University and the University of Idaho. Previously, he also served as provost and senior vice president at Kansas State University and dean of the Eberly College of Arts and Sciences at West Virginia University. He is recognized nationally and internationally for his research that utilizes satellite data and geographic information systems to analyze various dimensions of the Earth’s land surface. Dr. Nellis is currently a member of the executive committee of the Association of Public & Land-grant Universities Commission on Economic & Community Engagement.

Treasurer Sprague will speak in the afternoon at 2:15 p.m. He began his career in public service in his hometown of Findlay as both city auditor and treasurer. In Findlay, he balanced city budgets and helped finance a massive recovery effort after historic floods and the 2008 economic recession. Treasurer Sprague represented Ohio’s 83rd House District from 2011 to 2018. As a legislator, Treasurer Sprague was a leading voice on fiscal matters as a member of both the House Finance and Financial Institutions Committees. While in the private sector, he was a project lead at Ernst & Young and worked on a number of high-profile engagements with Fortune 500 companies before forming his own consulting firm.

We look forward to hearing these speakers discuss the policy issues most important to the region. 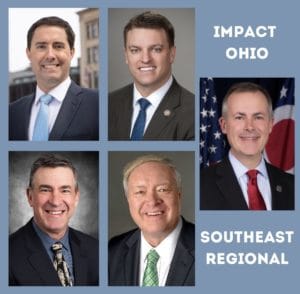